HOME AFRICA US/UK INDIAN OCEAN ITALY SKI & SPA SEA & SPA EAT & SLEEP BUYER'S GUIDE
From Slopes to Saunas
You need not be a skier to appreciate the charms of a great slopeside spa, as this short list of top winter resorts from Europe to North America proves. Such hotels can be their own attraction for non-skiers “dragged” to the mountains by piste-loving companions.
by Larry Olmsted 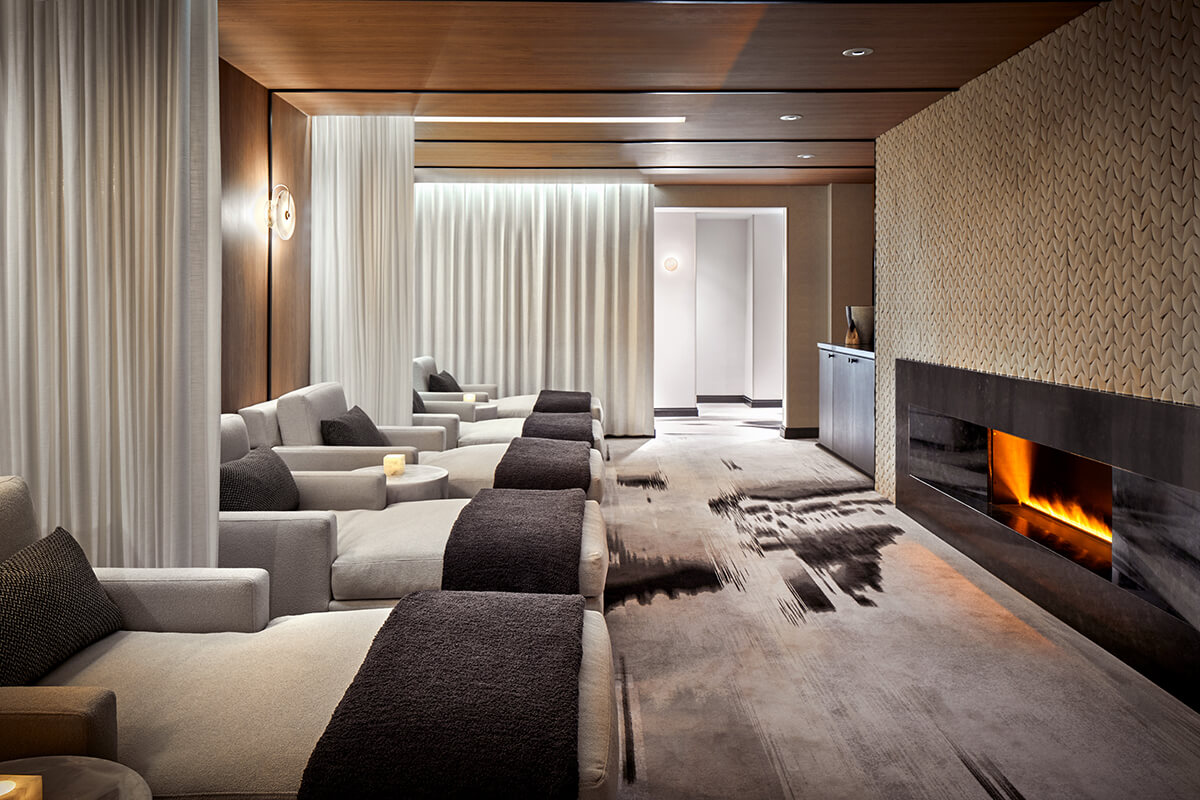 Massages are never a bad idea, but they can be even better after a long day on the slopes, when the quads are filled with lactic acid and the calves are happy to be freed from ski boots. Likewise, hot tubs, steam rooms, and saunas may come standard at the best resort spas, but the heat beckons guests even more when it is cold and snowy outside. These winter resorts combine it all: wonderful accommodations, service, and cuisine at world-class ski mountains, with extensive spa and wellness facilities, top-shelf beauty products, and a wide range of treatments by highly skilled therapists. 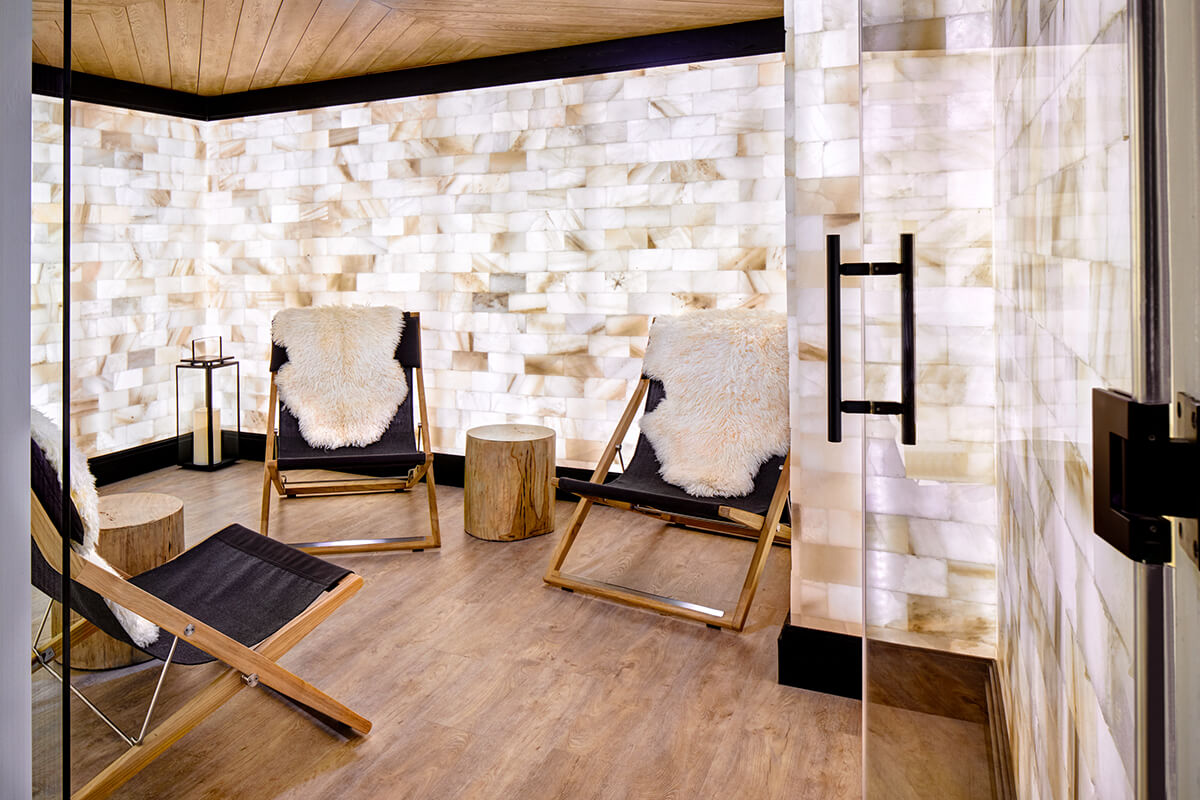 The Hythe, a Luxury Collection Resort Vail’s newest alpine hotel concept opened last November for this winter season. Located at the base of Vail Mountain, steps away from the Eagle Bahn Gondola, the property underwent a $40-million transformation and rebranding. It’s often tricky to take a former four-star property and turn it into a five-star experience, but Marriott International has done it with aplomb. The hotel’s common spaces and 344 guest rooms are richly appointed with wood, stone, leather, and faux-fur accents. Authentic artwork throughout evokes the glamour of skiing’s heyday, while culinary offerings bring new meaning to celebratory dining.

Well & Being Spa One of the most innovative wellness offerings at a ski destination is this spa’s smartly curated Recovery Lounge. Designed to help guests recuperate beyond the therapeutic massage treatments, it offers altitude-combatting oxygen therapy, a Himalayan salt inhalation room to relieve anxiety and improve circulation, and DIY tools such as Normatec compression boots and percussive therapy devices. Perfect remedies beyond the jets of the hot tub help heal sore muscles after a day of skiing Vail’s never-ending trails. thehythevail.com 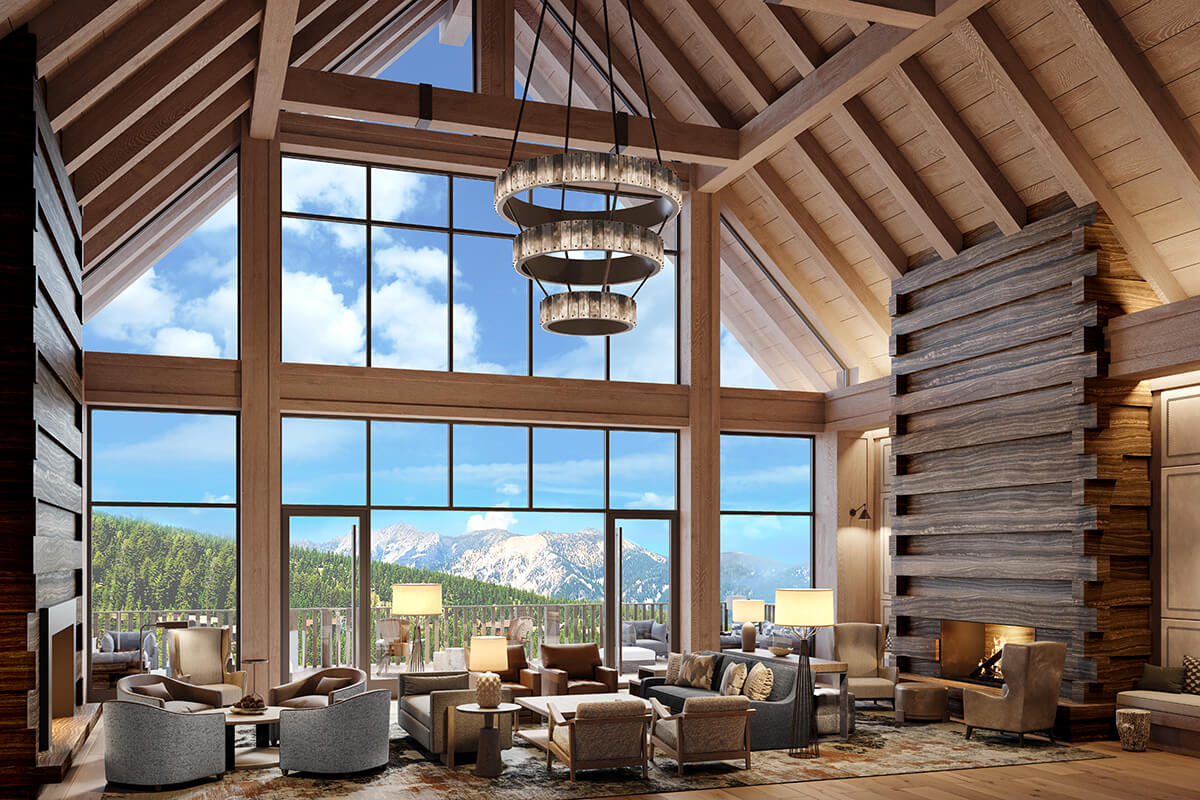 Montage Big Sky Opened this past December, this 139-room resort is the biggest luxury ski opening of the season and a highlight of a massive infrastructure project at the second-largest ski resort in the United States. The base village was rebuilt and expanded; Big Sky added the most advanced chairlifts in North America; and Montage’s second ski-in/out property christened the area with a world-class spa.

Spa Montage The 11,000-square-foot space has 12 treatment rooms including two for couples; a full-service beauty salon; a large, grotto-style indoor lap pool and relaxation area; his and hers lounges with heated plunge pools and steam rooms; a state-of-the-art fitness center; and a menu of wellness activities including yoga, meditation, sound healing, and personal training. The alpine-inspired treatments include the signature Elements of Wellness services, Valmont facials, Oxylight skincare technology, and massage and body products by Lola’s Apothecary. montagehotels.com 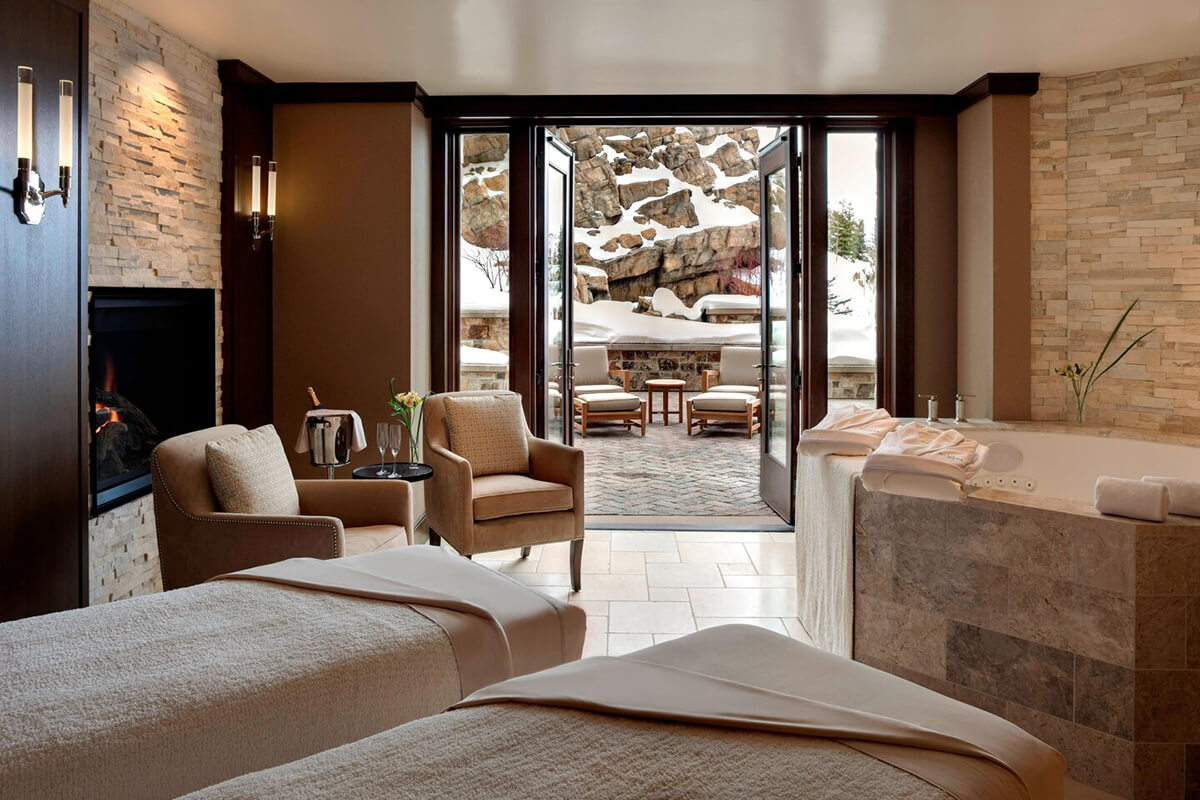 The St. Regis Deer Valley Set on the slopes above Deer Valley Resort’s Snow Park Lodge, the 177-room hotel is linked to the base by a private funicular and has an excellent ski-in/out location trailside with a full-service ski valet and luxury rental shop. You won’t suffer for indulgences, considering the property’s 10,000-bottle wine cellar, nightly sunset Champagne sabering ceremony, and a half dozen dining venues, including the new Vintage Room (a heated, greenhouse-style, trailside spot specializing in cocktails and raw seafood. 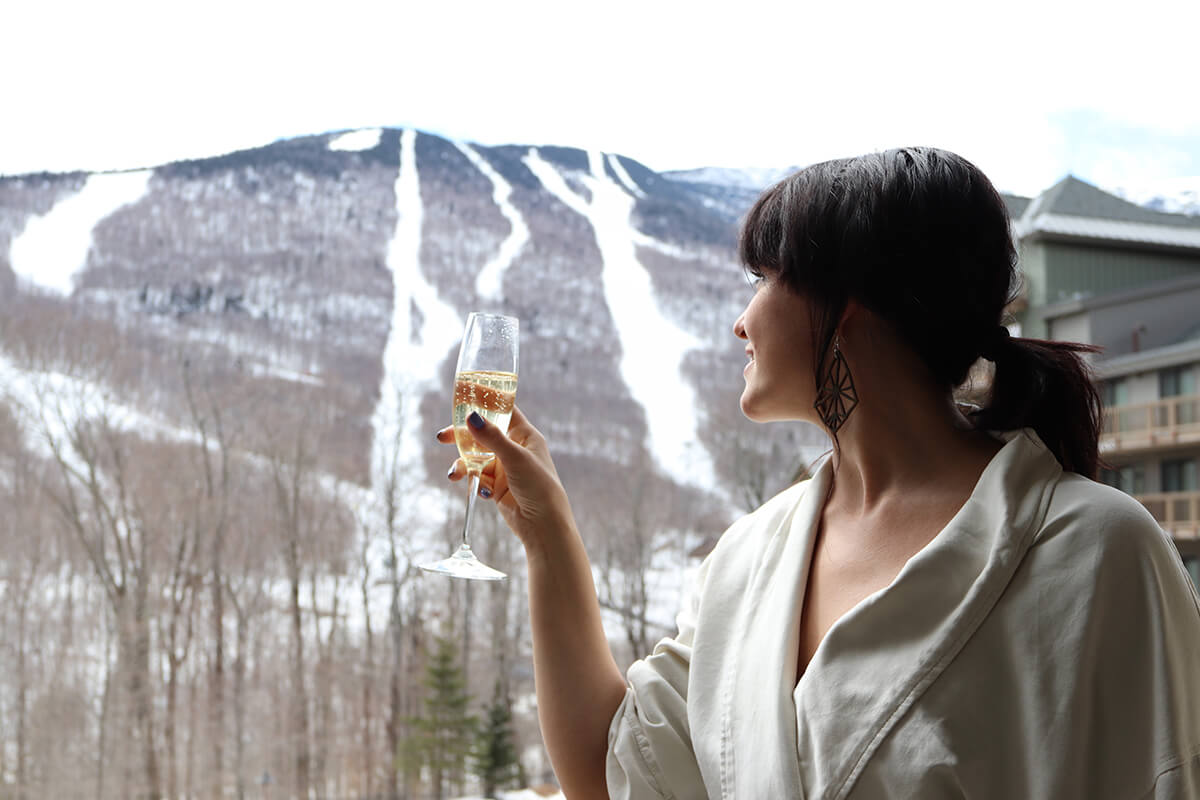 The Lodge at Spruce Peak Stowe’s only ski-in/out luxury hotel, centrally located in Spruce Peak Village at the base of Mount Mansfield, is the former Stowe Mountain Lodge, now part of the Hyatt Independent Collection. As such, it has undergone a refresh of its more than 250 guest rooms, suites, and residences, including spacious, floor-to-ceiling windowed penthouses with private check-in and concierge services. But its newest, most exciting offerings are Tipsy Trout and Alpine Hall dining venues. Great options for the après-ski scene, they also satisfy any cravings for sublime sushi and handcrafted cocktails.

The Spa at Spruce Peak With 21,000 square feet of space spread out over three levels, the spa’s narrow, undulating river-like pathways to the treatment and locker rooms fulfill their mission of creating a sense of peaceful serenity. Unique men’s and women’s Healing Lodges based on hot/cold therapy and a coed Sanctuary lounge overlooking the mountain connect guests with nature. Currently the only ski-destination spa in the United States to offer T-Shock cryotherapy, its extensive menu of services also includes a not-to-miss 80-minute Ku Nye Massage consisting of Tibetan healing techniques for lymphatic drainage and acupressure to strengthen the body’s natural rhythms. sprucepeak.com 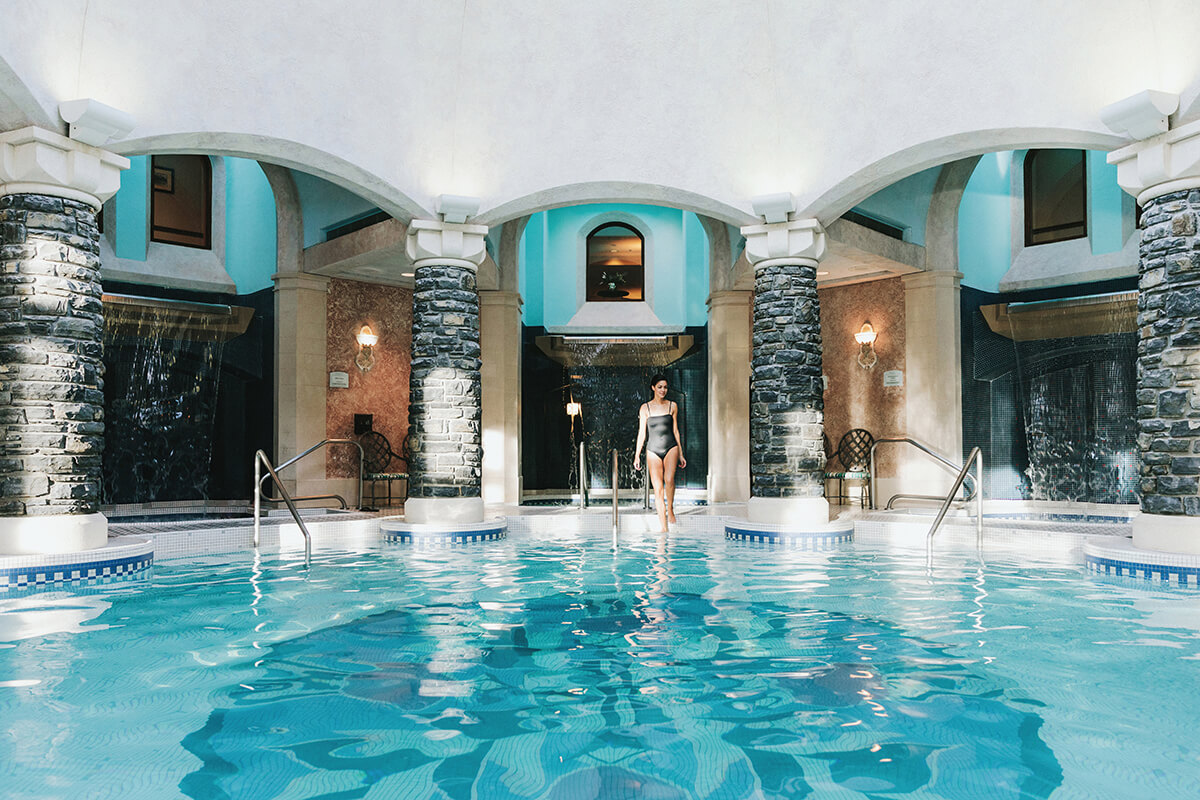 Fairmont Banff Springs The 757-room “Castle in The Rockies,” as it’s called, has been a Canadian landmark for more than 130 years. Banff is one of the world’s great mountain towns, located within Canada’s oldest national park, also home to a trio of major ski resorts sharing an interchangeable ticket: Lake Louise, Sunshine Valley, and Mt. Norquay. 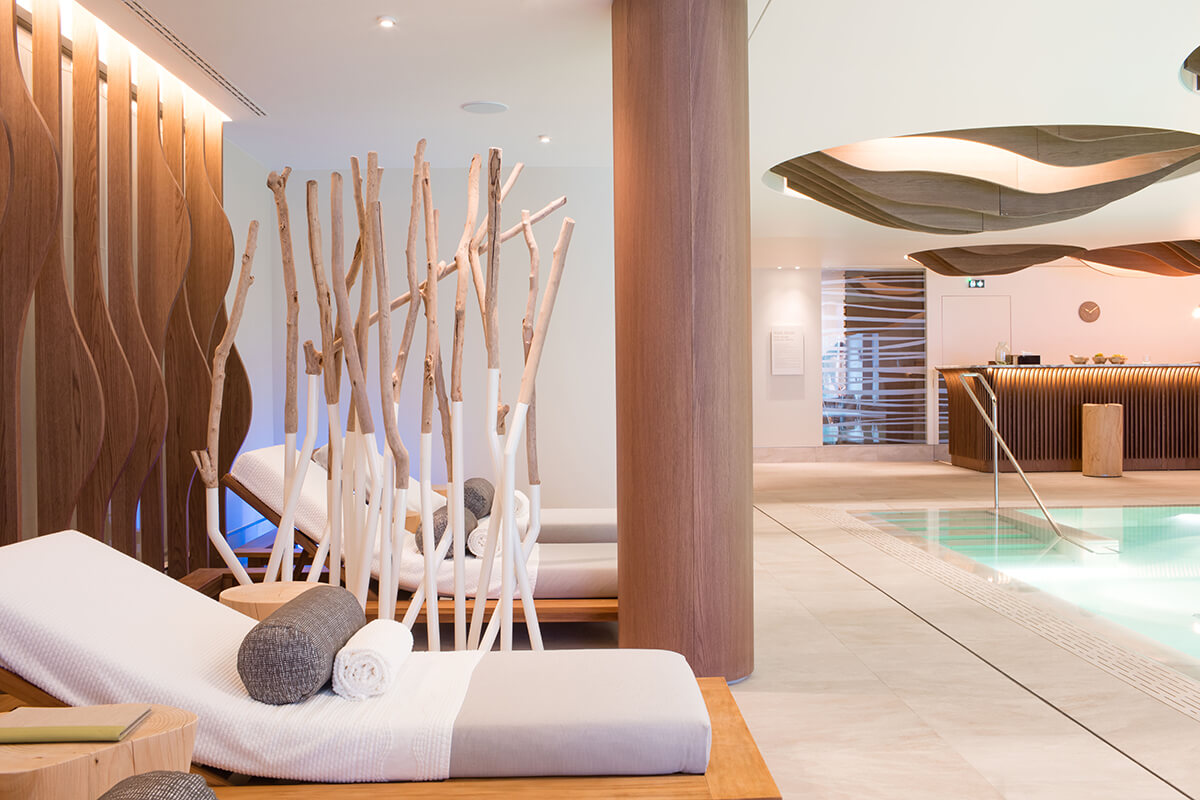 Six Senses Residences Courchevel Courchevel 1850 is the highest village in the world’s largest ski resort, and Six Senses is one of the planet’s top spa resort brands, a perfect match. The residential collection consists of 53 apartments and penthouses.

Six Senses Spa In addition to five treatment rooms, the spa features a large indoor pool and juice bar, an outdoor hot tub, a manicure/pedicure salon, a sauna, a steam room, a fitness center, and the unique Alchemy Bar, where you can be guided to make your own beauty products with local ingredients. The treatment menu stresses recovery and includes options specifically designed to restore and soothe muscles after skiing and snowboarding. These include a Movement Restoration massage, an Arnica and Ginger Hot Oil massage, Muscle Recovery sessions using Normatec Dynamic compression boots, and the Hydrotherapy Walk. The latter combines sauna, experiential showers, and short intervals walking in a Kneipp foot bath therapy, alternating hot and cold water, to stimulate lower body blood flow and the metabolism. sixsenses.com 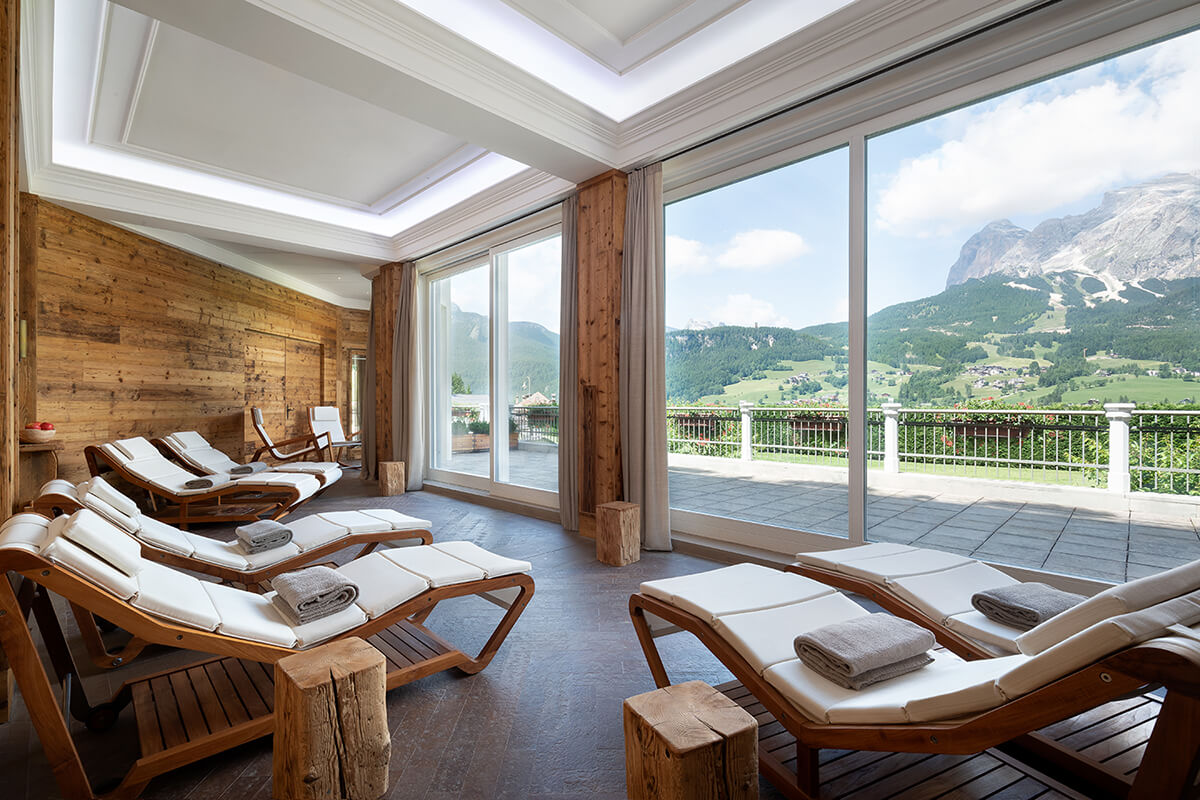 Cristallo Ultimate Spa You can go to extremes here, between the Turkish bath and sauna and the glass-encased, open-air Zen garden complete with a cold plunge pool fueled by a natural waterfall. All spa products are from medically driven Swiss specialist Transvital, and there are 10 treatment rooms plus The Cloud. This two-table, couples-style room features a bladder-based liquid immersion relaxation experience (essentially a flotation tank but you don’t get wet) that is typically combined with traditional treatments in the same space. marriott.com