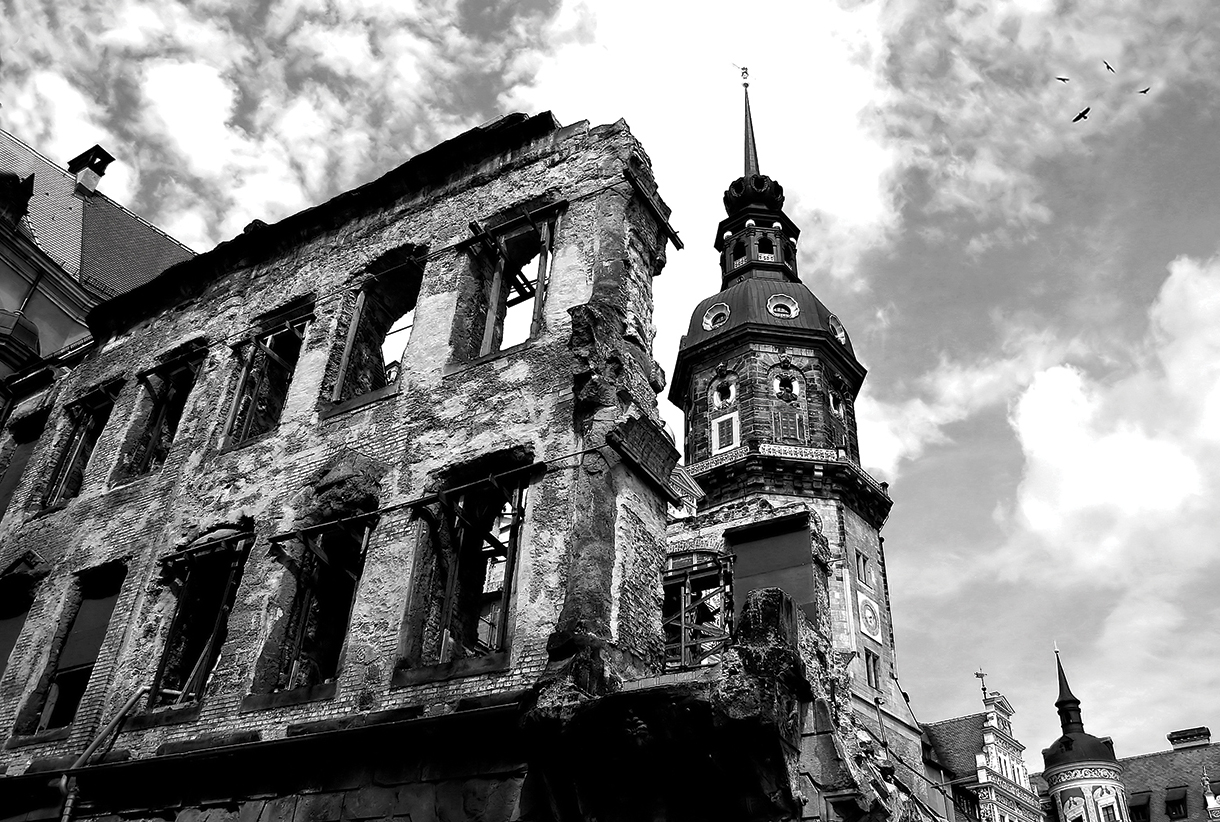 Dresden has risen from the ashes of war and is making headlines with its much-desired treasures.

Seen from across the Elbe River, the Dresden skyline is known for the cupolas and domes of Baroque churches, arcaded streets, the red-tiled gables of Dresden Royal Palace, and the copper-green Panther Quadriga sculpture crowning the opera house. Although the panorama of 18th- and 19th-century architecture recalls another era, all is not as it seems.

Despite the aged façades, nearly all of Old Town is a modern recreation. The original was destroyed in 1945 in a series of British and American air raids, claiming thousands of lives and leveling hundreds of historic buildings. A decades-long campaign has restored the ruined landmarks, ensuring that visitors encounter a streetscape scrubbed of wartime devastation. The palace, art galleries, Semperoper opera house, and churches were all reconstructed in their original locations; nearby blocks were rebuilt with buildings that maintain the scale and style of the prewar city. Its museum collections, vast and of superlative quality, miraculously survived, having been hidden in the countryside before the war. The Russians took the collections as reparations in 1945, but returned most of them by the late 1950s when East Germany was under Soviet control. 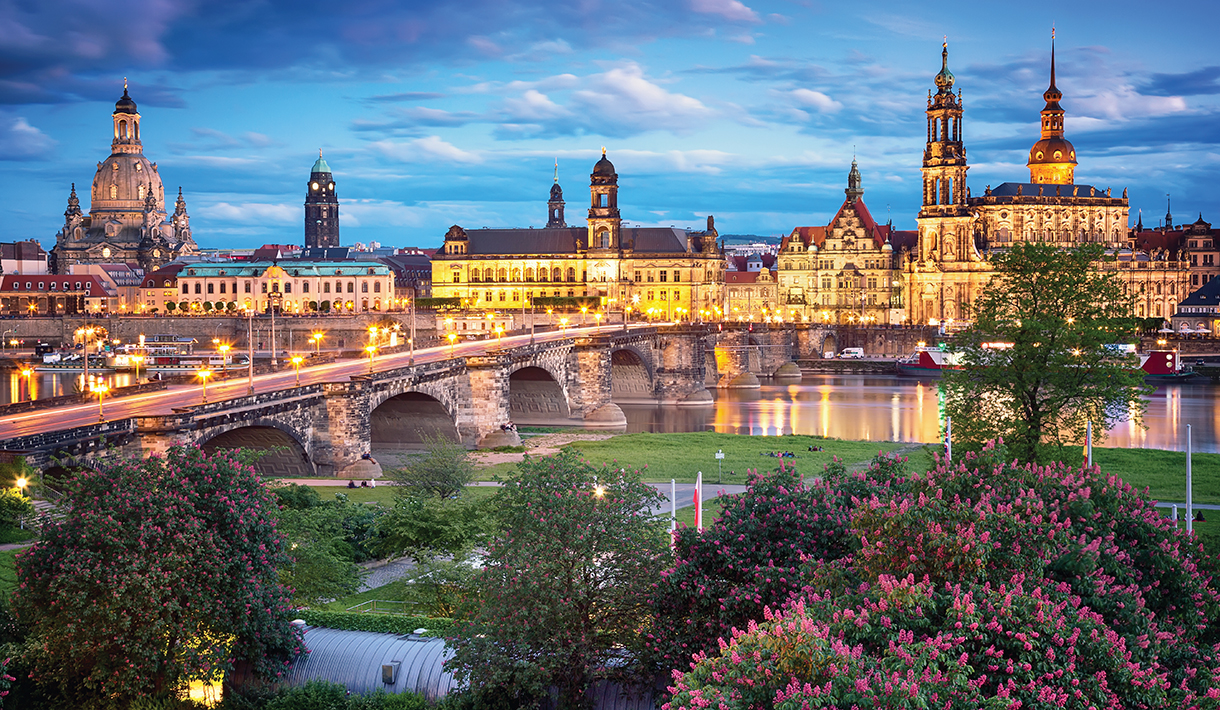 Today these works are on display as part of the Dresden State Art Collections (skd.museum), a complex of 15 museums comprising several million items spanning five centuries. Dresden’s heyday was roughly 1550 to 1750, when the rulers of Saxony were at the height of their power and prestige. Enriched by the region’s silver mines and industry, and eager to project status and taste, the Electors of Saxony created elaborate buildings and amassed treasures that rivaled those of sovereigns in France, Italy, England, Spain, and Russia. Public tours began in the 1580s, and by the Baroque period, guidebooks detailing the riches were available in eight languages. Today the museums welcome more than 2 million visitors a year, mainly from Central Europe and Russia, as Dresden has yet to achieve renown among world travelers.

In November the museums made international headlines when parts of three significant sets of royal jewelry were stolen from the complex in an early-morning heist that is the stuff of a Hollywood plotline. There hasn’t been a bigger theft since the Second World War. At press time investigations to recover the items, valued in the hundreds of millions of dollars, were just beginning. In other news, the Semper Building at the Zwinger reopens in February 2020 with a reinstallation of Old Master painting and sculpture collections. Here, an in-the-know guide to the Zwinger and many of the complex’s other museums—including the Green Vault, where the robbery took place—that are housed in the Royal Palace and other restored buildings. 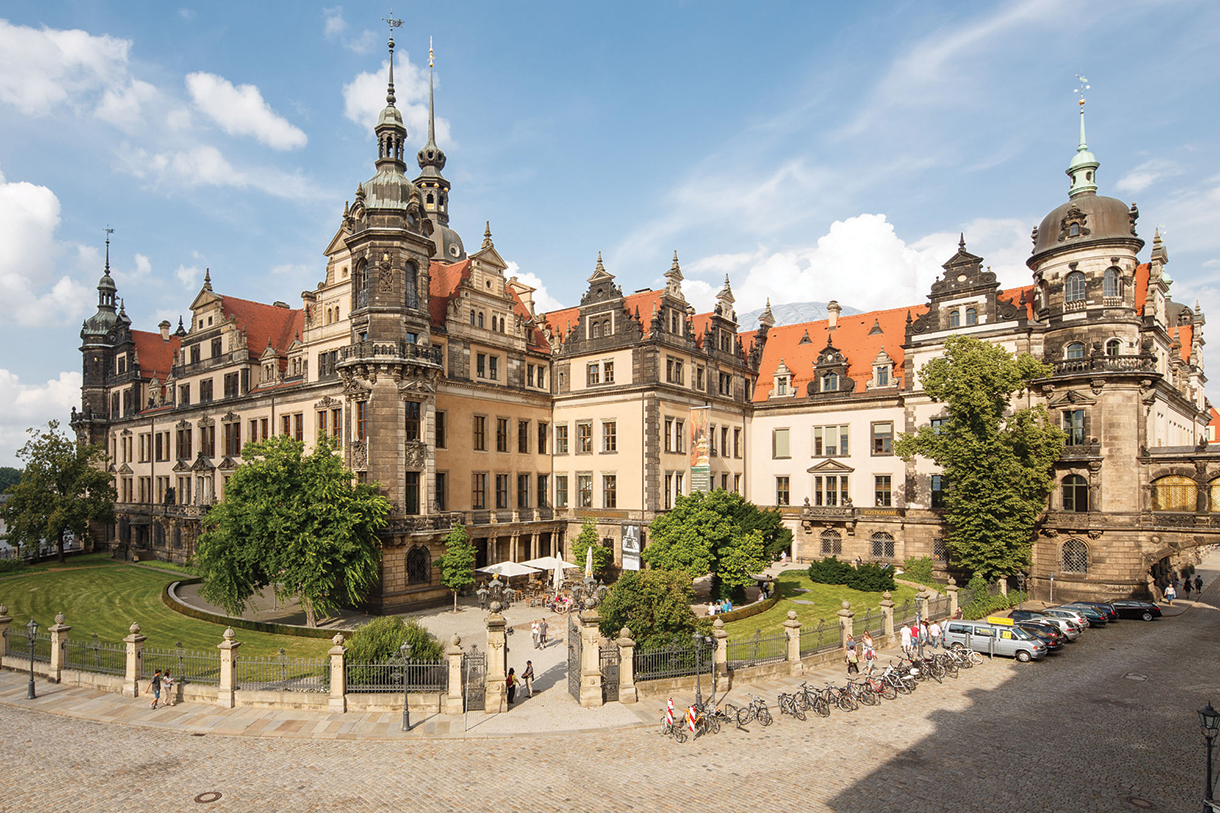 The Baroque and Renaissance-style exterior of the Residenzschloss. David Brandt

The Electors and Kings of Saxony lived here from the Renaissance to the First World War. Gutted in the 1945 bombing and slated for demolition, the castle, whose four main wings are topped by domed turrets, was rebuilt after Germany’s reunification. In recent decades parts of the structure have reopened to the public. 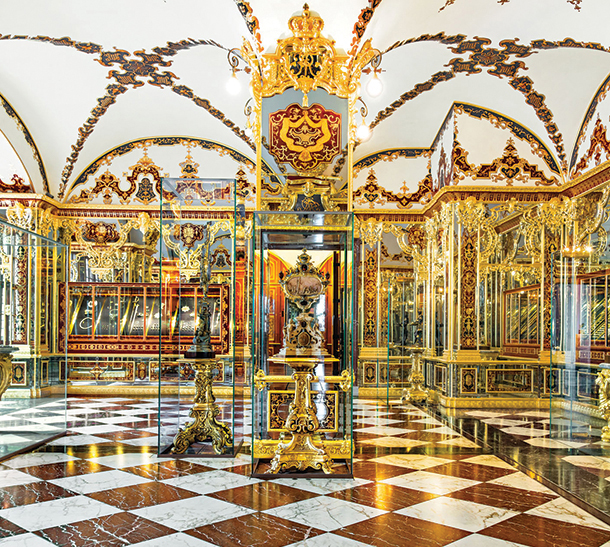 The historic Green Vault is a Baroque symphony of mirrors, gold, and precious objects. 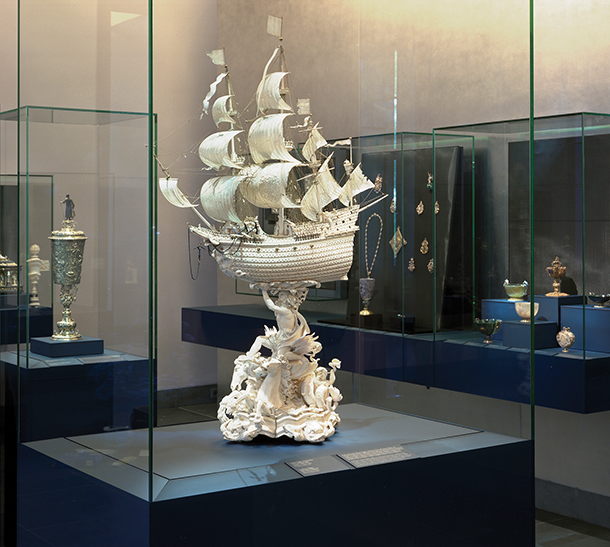 The Green Vault This eight-room suite contains the Saxon crown jewels and more than 2,000 plates, vessels, jewels, statuettes, and whimsical decorative objects fashioned by royal goldsmiths and European master craftsmen. The priceless riches set out in mirrored cases and gilded consoles include the 50-carat Dresden White Diamond, a 648-carat sapphire, and the gold seal ring of Martin Luther. A jewel-studded wooden figurine of a South American native carries a tortoise-shell platter heaped with Colombian emeralds. Dresden police and museum authorities reported around 100 pieces stolen during the historic November heist. Two thieves raided a display case containing sumptuous royal adornments encrusted with diamonds, many set in their mountings during the 18th century. Among the stolen goods are a bejeweled rapier and sheath, cufflinks, shoe buckles, brooches, and buttons. At press time, the lot has yet to be recovered.

The New Green Vault A thousand more treasures are one floor above in 12 state-of-the-art galleries that opened in 2004. Among the massive lathe-turned ivory goblets, inlaid gold boxes, rock crystal pitchers, and a hat clasp set with the 41-carat Dresden Green Diamond (on loan to The Metropolitan Museum of Art’s Making Marvels exhibition, through March 1, 2020), the virtuoso showpiece is a 4-foot ivory statue of Neptune holding aloft a fully rigged frigate manned by dozens of miniature sailors. One of the items, a jewel-encrusted tabletop model of an Indian palace, was valued at more than the cost of constructing the Royal Palace.

The Electoral Wardrobe This rotating display of costumes worn by the Electors and their wives is unrivaled among international museums. The female costumes from the Renaissance, their intricately stitched fabrics perfectly preserved, are the only surviving examples in the world. The fashions are juxtaposed with painted portraits of the owners in related attire and parade weapons. 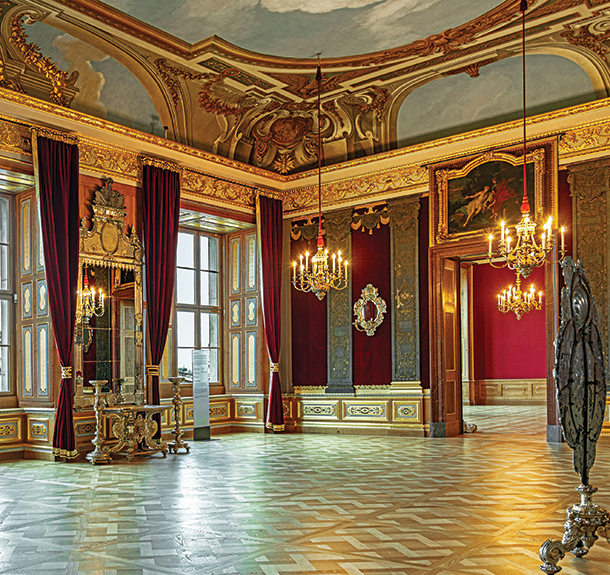 State Bedroom in the Royal State Apartments in the Residenzschloss. HC-Krass 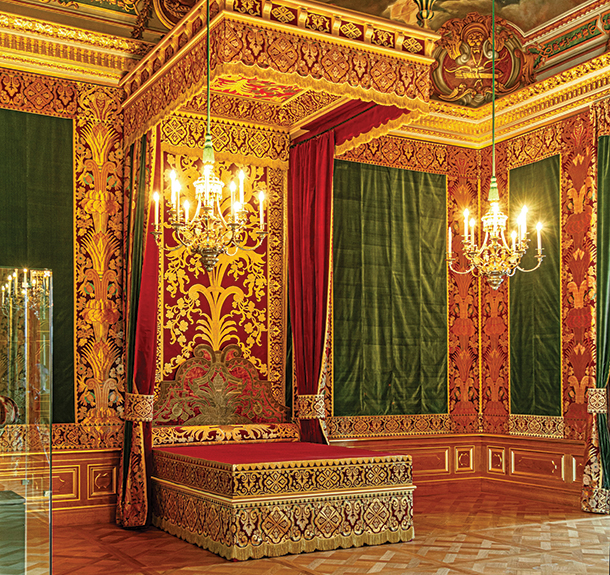 A lavish hall inspired by Versailles in the Royal State Apartments. HC-Krass

The Royal State Apartments In the lavish Audience Chamber, the throne rests on a raised platform beneath a canopy and a ceiling painting depicting Hercules. A never-used gold-embroidered imperial bed dominates the ceremonial State Bedroom. Nearby rooms present the Electoral garments and accouterments for hunts, festivals and masquerade, and a coinage and portrait medallions collection sampled from 300,000 items in the SKD’s Coin Cabinet. 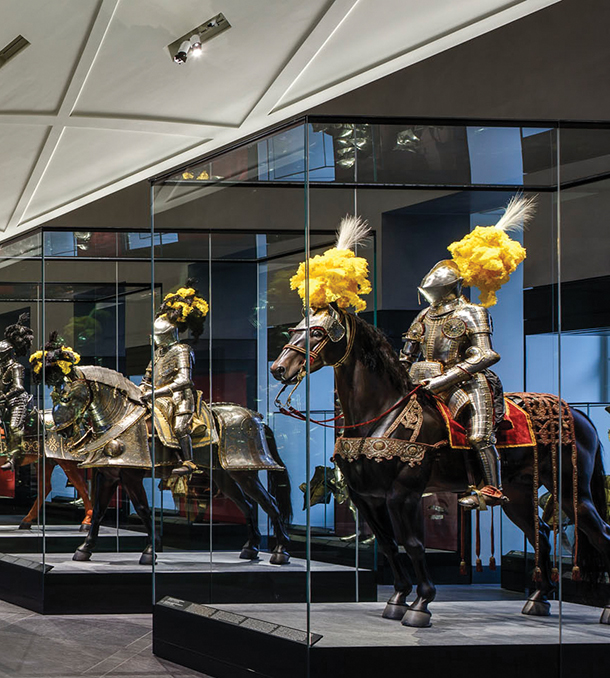 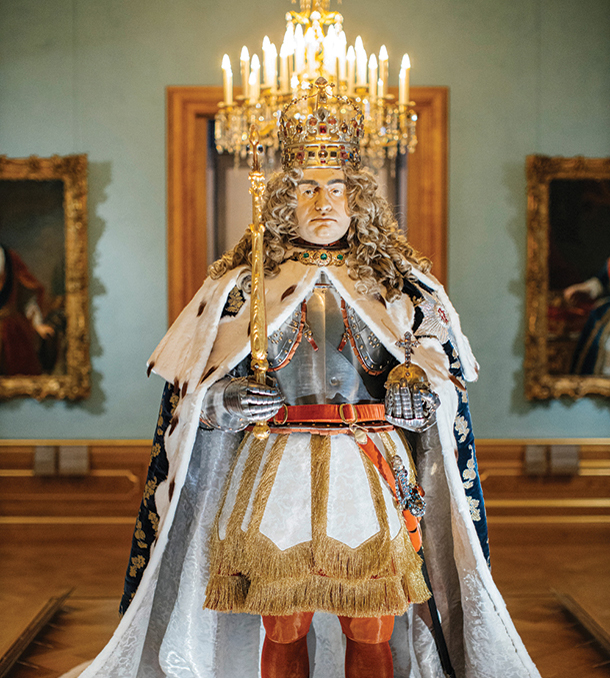 Coronation regalia of August the Strong replete with life mask of the Elector.

The Armory Saxon rulers amassed one of Europe’s great collections of Medieval and Renaissance parade weapons and costumes, some 12,500 items. A vast hall displays hundreds of these pieces in a cavalcade that evokes the martial parades and tournaments once staged in the adjacent courtyard.

The Turkish Chamber This hall devoted to Ottoman art and weaponry is mysteriously darkened with pools of light enhancing the display. Saxony’s great art patron August the Strong was fascinated by the sultans, sending agents on buying trips to Constantinople and receiving pieces as diplomatic gifts. He even imported camels, Arabian horses, and riding gear to enhance his festivals. 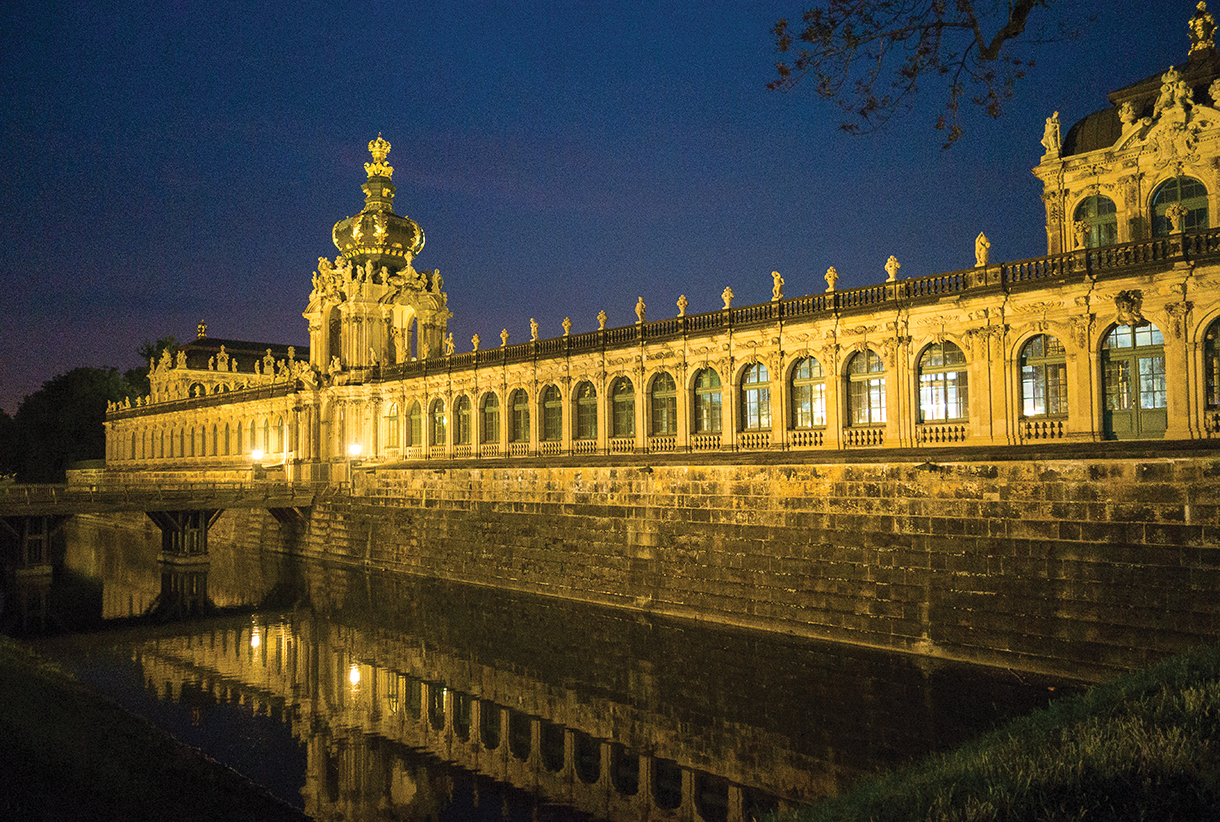 The 18th-century pleasure palace and a later-added art gallery form an oval-shaped campus that was entirely wrecked in the war and rebuilt in the 1950s and ’60s. Steps from the Royal Palace, the six Baroque pavilions are linked by arcaded galleries surrounding a sprawling central garden. Sunlit galleries house the renowned Dresden porcelain collection and scientific instruments, and old master paintings and sculpture fill the art museum. 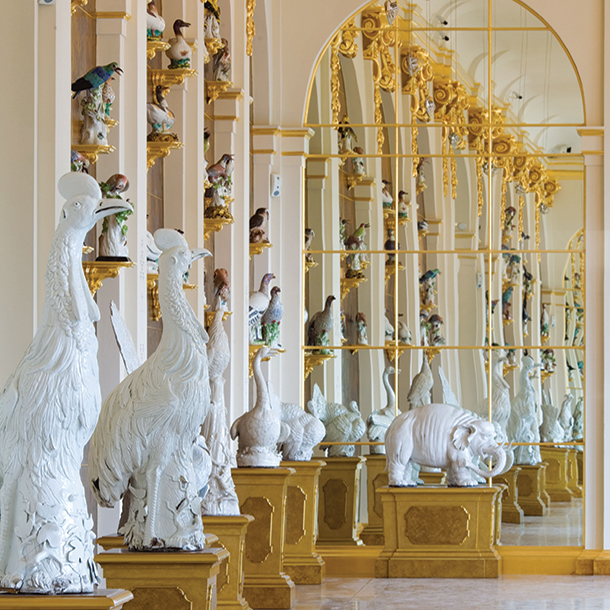 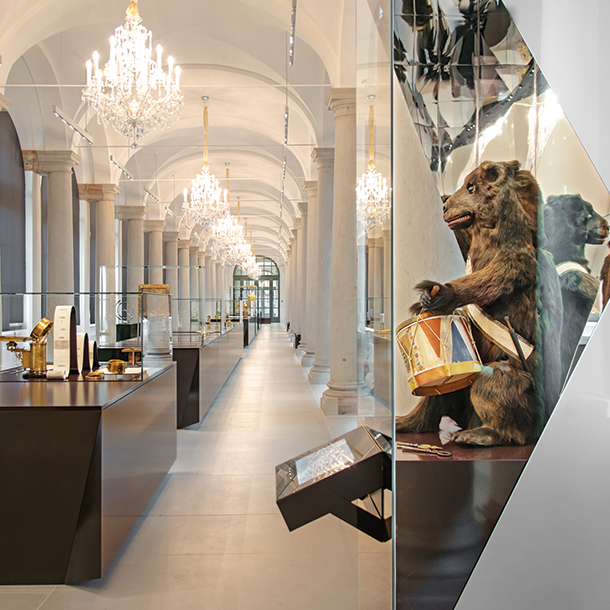 The Porcelain Collection August the Strong was obsessed with porcelain, amassing one of the world’s greatest collections, and establishing Europe’s first factory in Meissen after a German chemist discovered the formula that had been a Chinese secret for centuries. An eccentric presentation by New York architect Peter Marino includes large-scale, blue-and-white Ming vases and painted vessels from the reign of Chinese Emperor Kangxi, as well as Imari and Kakiemon wares from 17th- and 18th-century Japan, and astounding vessels, portraits, and multi-figure statues produced at the Meissen factory. The most entertaining rooms contain life-size animals—many based on creatures in the Elector’s zoo—forming a Meissen menagerie.

The Mathematics-Physics Salon The exhibit showcases hundreds of historic scientific instruments that the Electors amassed to understand the world: globes and maps, telescopes, microscopes, burning mirrors.The evolution of the clock is displayed near a 13th-century celestial globe, one of only five known from this period. Visitors can operate a 3-D model of a calculating machine developed by Blaise Pascal, and witness the inner workings of objects in digital animation, including a drumming bear made in 1625, with real fur and eyes that move in sync with the ticking clock on his chest. 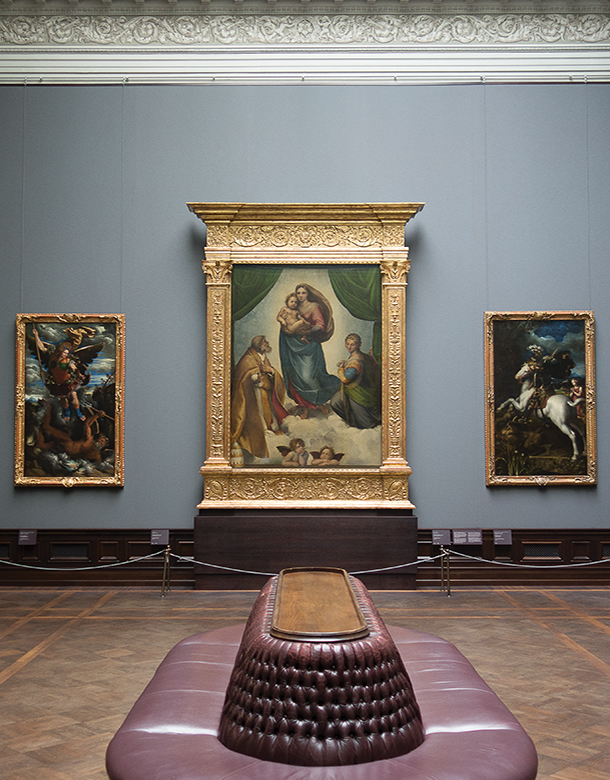 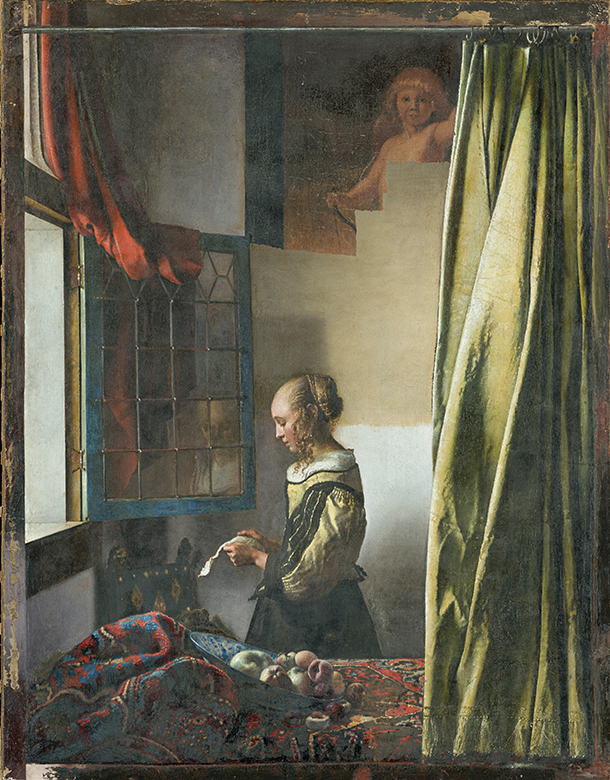 The Old Master Picture Gallery (Gemäldegalerie Alte Meister) The signature masterpiece of Dresden’s painting collection is Raphael’s Sistine Madonna (1512–13). The work is one of 3,800 paintings in a collection that spans the Renaissance to the Rococo, including Giorgione’s Sleeping Venus (1508–10), Correggio’s Holy Night (1522–30), Vermeer’s Girl Reading a Letter by an Open Window (1659), and Rembrandt’s Ganymede (1635). Panels by Lucas Cranach, court painter to the Electors in the 16th century, include the first life-size, full-length royal wedding portraits. <br><br> The Albertinum In the 19th century, the 16th-century arsenal was converted into a Renaissance-style museum and named for Saxon King Albert. Disastrous flooding in 2002 led the SKD to relocate underground storage and conservation to a two-story addition capping the courtyard. In 2010 the building reopened as a museum from Romanticism to the present, picking up where the Old Master collection leaves off.

<br><br>Dresden had one of Germany’s largest collections of modern art until the Nazis destroyed or sold works declared “degenerate.” West German museums later recovered many losses, but institutions behind the Iron Curtain were isolated from the art market, and the SKD’s holdings remain thin. There are some international postwar artists, but the main focus is German artists.