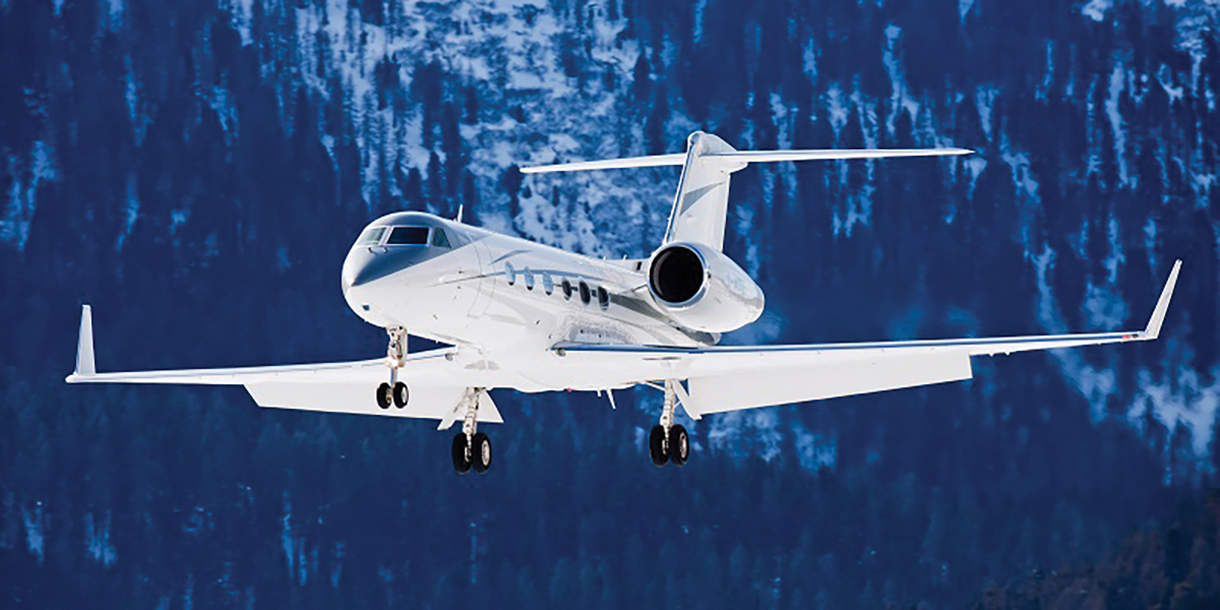 Jetting to the Slopes

These private flight providers will get you closer to your ski mountain of choice than commercial airlines.
By Bailey Stone Barnard

One sign of a good winter destination is that it’s hard to get to. Especially when there is heavy snowfall (which means better ski conditions), roads can be closed and runways can be icy—resulting in travel delays that mean you could be stuck driving up a mountain instead of enjoying that prime powder.

Runways in mountain destinations are often short and few and far between, due to the lack of large flat spaces atop a mountain, which significantly reduces the number of daily flights and commercial and private carriers. Also, at such high altitudes, aircraft engines may not perform optimally, so their takeoff and landing distances are inhibited, which presents an even bigger problem when pilots have to navigate mountain peaks during their approach.

Whether flying into smaller regional airports—in Lake Tahoe or Mammoth in California; Aspen or Telluride in Colorado; Big Sky or Jackson Hole in Wyoming; and Squamish near Whistler in Canada; or into any of several small airports near ski resorts in the Alps in France, Germany, and Switzerland—these flight service providers can help get you closer to your winter destination.

If charter is your preferred method of air transport, PrivateFly (privatefly.com) is a good place to start. The BBC has billed the company as a sort of Uber for private air travel, working as a charter broker with more than 7,000 aircraft integrated worldwide. In 2018, PrivateFly was acquired by Directional Aviation, the conglomerate that owns Flexjet, Flight Options, and Sentient Jet, among other private aviation leaders. Depending on the specific mission, a light jet can be a good choice for regional flights of about 1,000 miles or less, as they typically offer more versatile performance, such as shorter takeoff and landing distances and faster climb rates. And PrivateFly can arrange the charter between travelers and owners of aircraftsuch as the Embraer Phenom 100 or Cessna Citation M2. For international travel, long-range aircraft like the Gulfstream G650 will get you anywhere around the globe with a long enough runway, and, as needed, from there a smaller regional plane can get you directly to ski destinations.

If you’re a frequent private jet traveler, you likely have already found a more cost-effective program, like fractional ownership, jet card, or other membership-based solution. Flexjet, NetJets, and other larger international providers operate large fleets that include long- and short-range aircraft and will have plenty of options for getting you as close as possible to your winter destination, no matter how remote. However, flying with those companies is typically much more expensive than flying with smaller regional providers like JetSuite (jetsuite.com) and Wheels Up (wheelsup.com), both of which offer smaller fleets of more versatile aircraft while still providing some of the most reputable service in the industry.

JetSuite owns a fleet of Embraer aircraft—Phenom 100 very light jets and Phenom 300 light jets—that deliver industry-leading performance in their segments and the ability to take off and land from short-runway and high-altitude airports, such as those in Aspen, Telluride, and Lake Tahoe. JetSuite operates primarily in the contiguous United States, as well as parts of Mexico and Canada. Its sister company, public-charter airline JSX (jsx.com; formerly JetSuite X) is a hop-on jet service that provides the best of private flying for the cost of commercial fares. JSX works like a commercial airline as a by-the-seat service, except that their 30-passenger jets take off and land at private terminals, so travelers avoid many of the hassles of big public airports and do so at a fraction of the cost of chartering an entire jet. The JSX fleet consists of Embraer E135 and E145 commercial regional jets and, in winter months, the company offers flights to the Mammoth Yosemite Airport, which is just a 14-minute drive to some of California’s best skiing.

In December public-charter airline Taos Air (from $399 round-trip; skitaos.com) launched its service for ski weekends to the Rockies. On Thursday or Saturday catch a 30-seat Dornier 328 at private terminals in Austin or Dallas and fly two hours to a terminal nearby Taos Ski Valley. Catch their flights back to Texas on Sundays and Monday holidays. In January Taos Air flights will be available to skiers departing from private terminals in suburbs of Los Angeles and San Diego. On the East Coast, Tradewind Aviation (from $532 one-way; flytradewind.com) runs six shared charter flights per weekend between Westchester, New York, and Stowe, Vermont, where the airline’s eight-seat Pilatus PC-12 deliver passengers 25 minutes by car from Stowe Mountain Resort.

Another membership-based private flight solution for regional winter travel is Wheels Up, whose Beechcraft King Air 350i aircraft present some of the top short-field capabilities of any aircraft in its class. The twin-engine-turboprop needs a takeoff distance requiring as little as 3,300 feet, which enables it to fly in and out of just about any airport near the slopes. With service throughout the United States, Wheels Up offers its members the ability to fly privately to popular ski destinations like Telluride, Jackson Hole, Deer Valley, and Lake Tahoe.