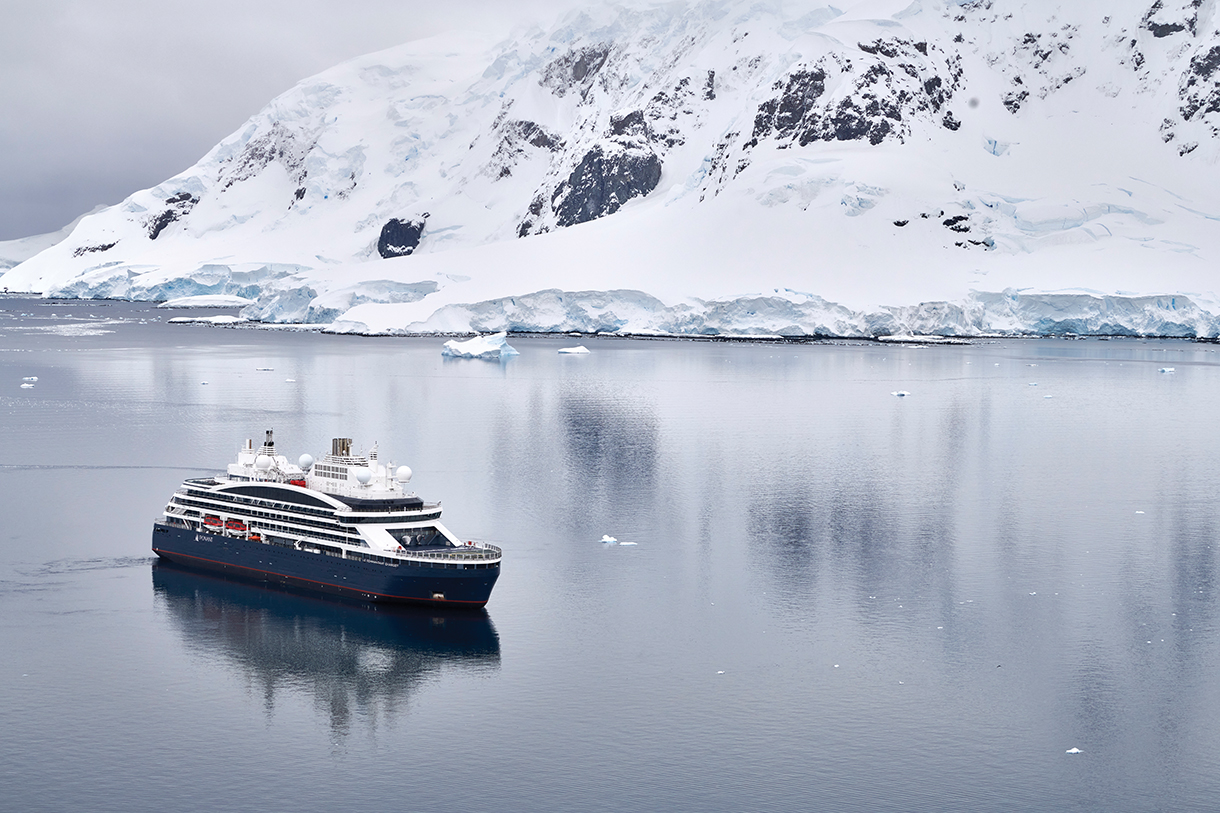 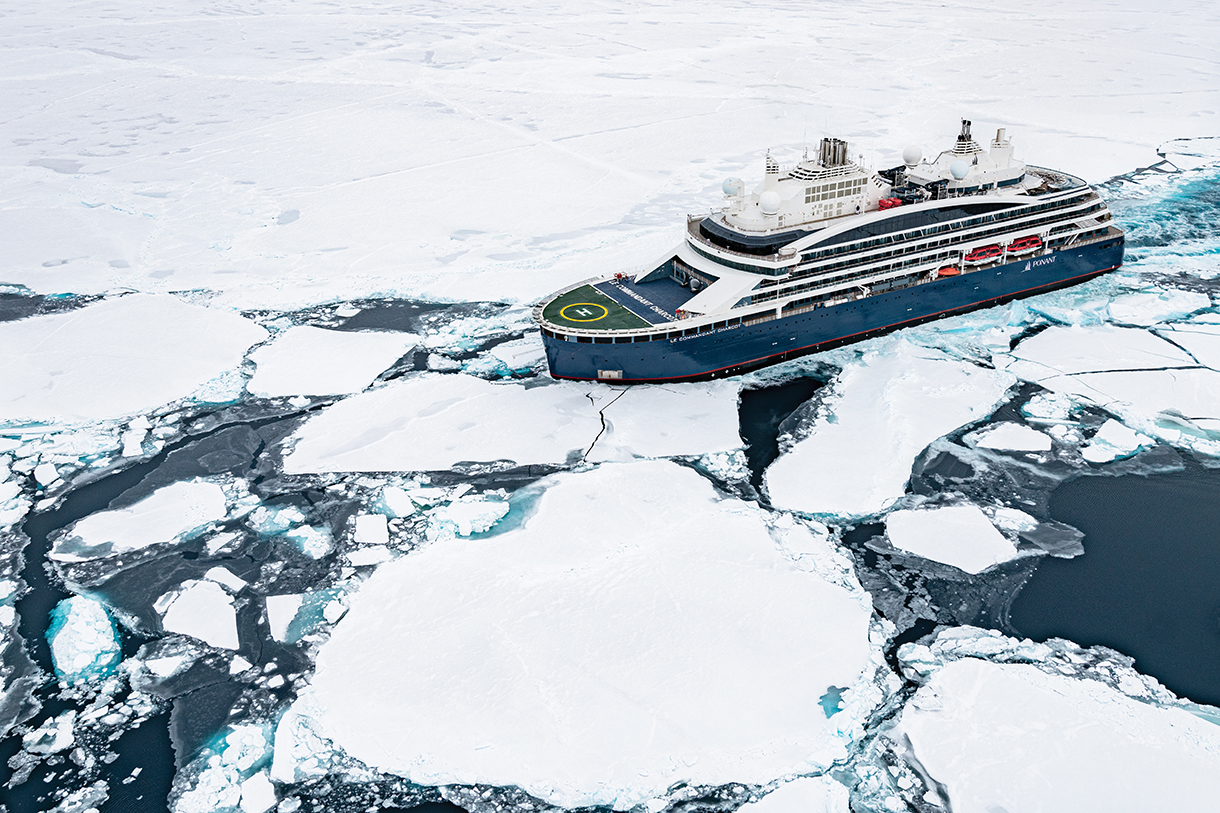 When the French-flagged Le Commandant Charcot breaks through the polar sea ice, it can sound like a house is crashing down around your ears. But there is no cause for alarm. The Charcot—the first luxury cruise ship to also be an icebreaker—has opened up polar voyages previously off-limits. And while the Charcot meets and often exceeds every measure of luxury, it’s also the first cruise ship to have a science officer aboard whose job is to coordinate the work of an onboard team of climate researchers. Among superb sustainability credentials, the Charcot ranks as the first polar exploration cruise ship primarily powered by liquefied natural gas (LNG) and electricity from batteries instead of diesel, providing a model for future shipbuilding.

Icebreakers remain among the rarest types of vessels. The United States has two such ships, both aging members of its Coast Guard fleet. In a class of its own, the PONANT-owned Charcot made its first-ever voyage up the ice-choked coast of East Greenland, illustrating the ship’s capabilities; its arrival often surprising the Arctic’s full-time residents: polar bears, seals, walruses, and whales. Residents of a small Inuit coastal village normally don’t see ships arrive until the ice melts but were delighted to shuttle passengers over their still-frozen terrain via dogsled.

Cruise ship veterans will be familiar with the required safety drills, but the Charcot adds a twist that speaks to the unique environment the vessel traverses: a polar survival suit stored under the bed. As the Charcot departed from Reykjavik, Iceland, for its East Greenland voyage, a whale was spotted a few hours later, its plume seemingly marking the ship’s passage into polar waters. Another ship was not to be seen until arriving in Svalbard 12 days later. 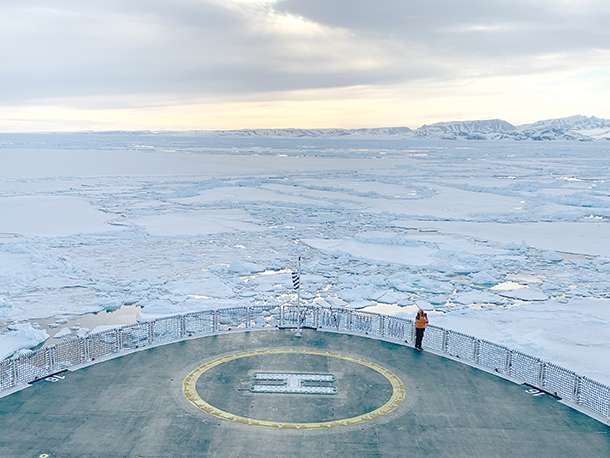 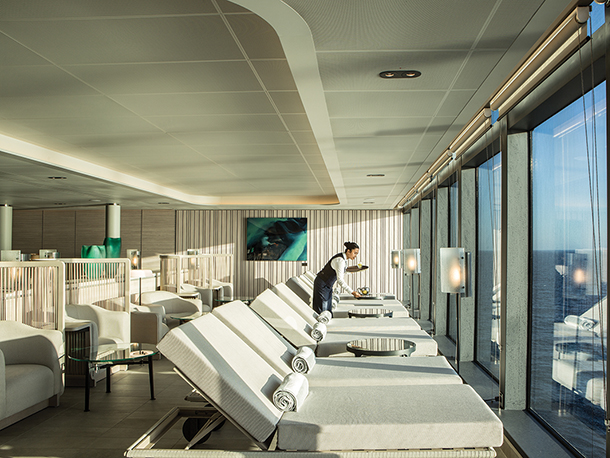 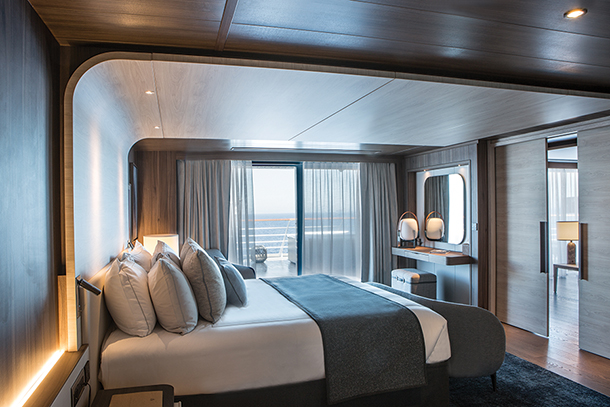 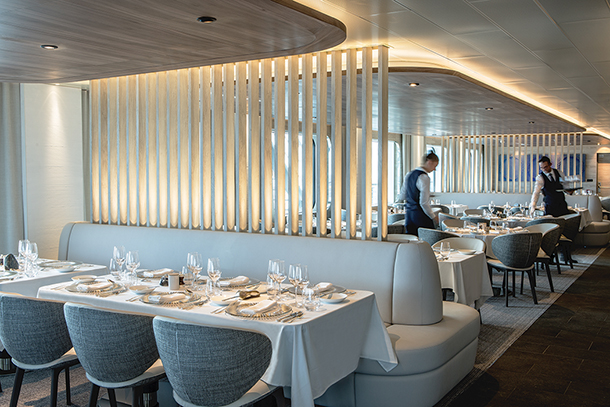 The vessel is well-named: Jean-Baptiste Charcot was a French polar explorer and among the first to explore East Greenland. Ship’s Captain Patrick Marchesseau admires Ernest Shackleton, the legendary Irish explorer of Antarctica who epically survived, along with the 27-man crew, the loss of his ship Endurance. Completed in 2021 at a reported cost of $324 million, Charcot sails where few dare, visiting polar locations earlier in the year that wouldn’t normally be accessible, but in a state of luxury polar explorers now and then would envy. The cabins are well appointed with interiors that direct your gaze toward the balconies for the outside views and are equipped with heavy curtains as the sun never sets during the length of the Arctic voyage. Rumbles and shudders heard from private quarters and across the nine decks are routine as the Charcot breaks through the ice.

Almost worth the cruise by itself, the superb Alain Ducasse restaurant Nuna is the first one at sea from the renowned French chef. Casual dining is available in Sila on the observation deck, and French wine flows freely in both eateries. Other amenities include a spa, gym, indoor swimming pool, gaming room, cigar bar, and small library (whose volumes are understandably in French). The atrium features a 30-foot-high, ever-changing digital art installation called Oscillations that was inspired by ice landscapes and commissioned for the ship from Miguel Chevalier. A wraparound deck equipped with spotting scopes works as a walking route or vantage point to see the ice—as outside temperatures in East Greenland generally hover at just below freezing. Recycled exhaust gases heat outdoor tubular benches and fresh water comes from the ocean itself thanks to a saltwater filtration system, eliminating any need for plastic bottles on board. Ship life feels cordial, if not intimate with 245 passengers in 123 cabins. The Charcot crew numbers 215. 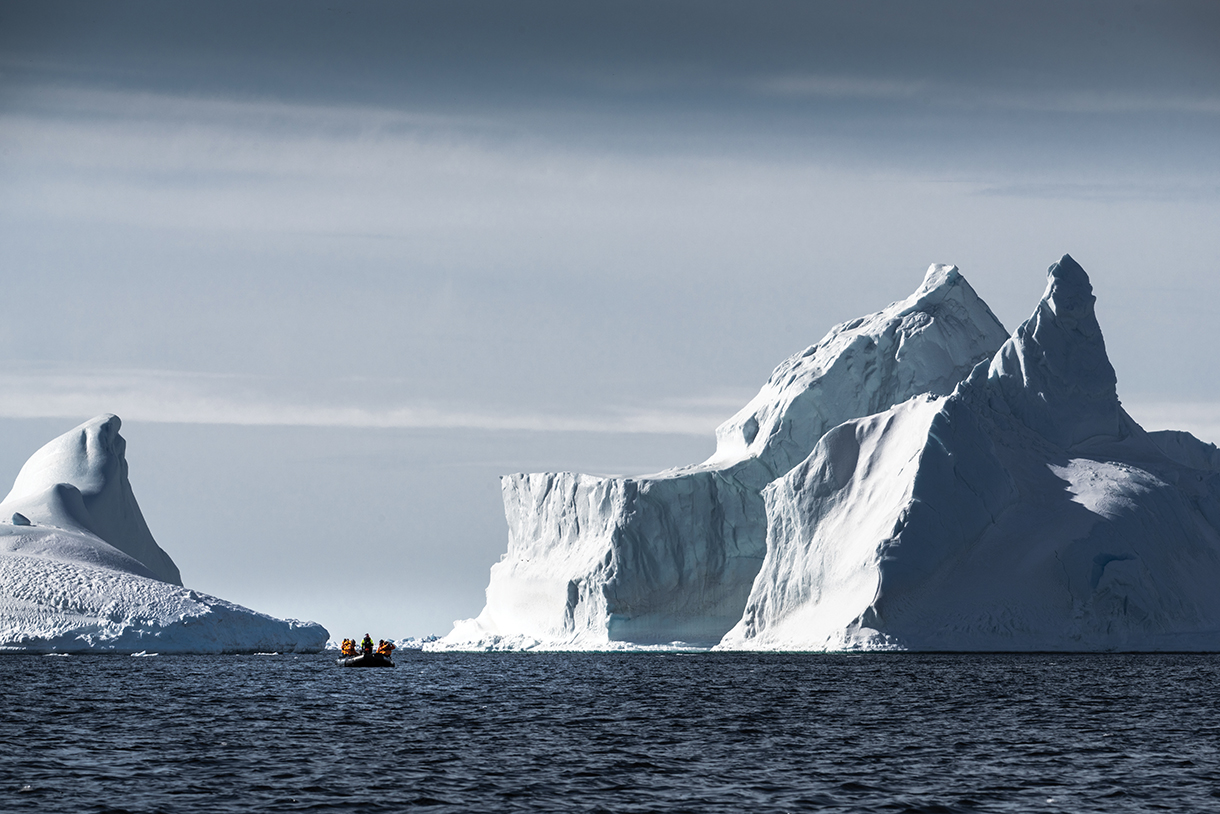 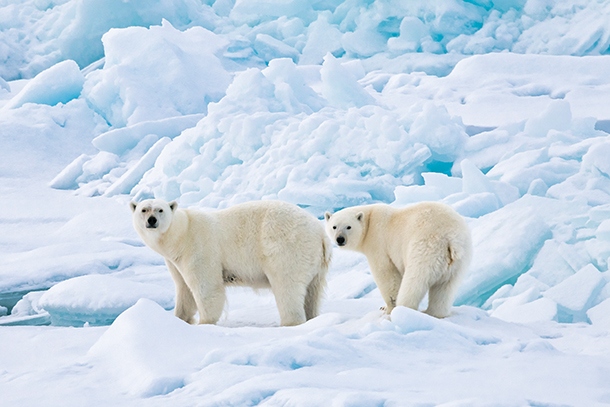 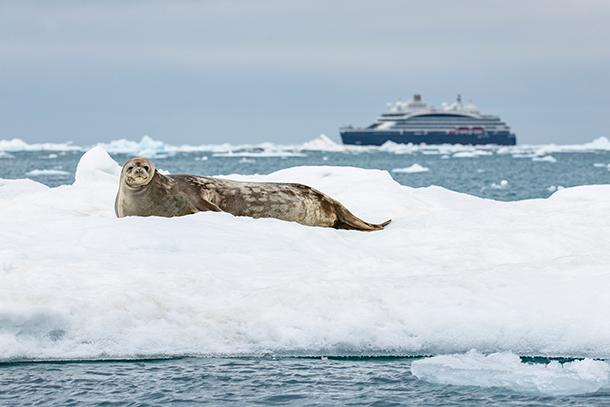 Service, interiors, amenities, and location notwithstanding, the ship itself holds attention as the main attraction. It is the first Polar Class 2 vessel in the world, measuring 492 feet long and specifically designed to operate in temperatures as low as minus 25 degrees Celsius (minus 13 degrees Fahrenheit). With a double hull built for icebreaking, it can pass through 8-foot-thick ice packs and obstacles such as ice ridges measuring nearly 50 feet in size. There’s also a bridge in the stern that makes it easy to back out of thick ice the way it came in, as the underwater Azipod propellers can rotate as required. Top speed in open water is 17 mph.

A major innovation, the use of LNG as a fuel source, coupled with the ability to store energy in banks of onboard high-capacity batteries, allows the Charcot full autonomy in polar areas for two months, if necessary. This hybrid capability reduces the Charcot’s carbon dioxide emissions by 25 percent, as compared to diesel-powered ships. An all-electric, zero-emission mode can be employed for one to two hours, useful when operating in particularly environmentally sensitive areas. The option also reduces engine noise that might scare off wildlife. The Charcot’s ability to sail silently in near proximity to polar bears, for example, is impressive. Low sulphur marine gas oil remains at-the-ready as a backup.

Satellite imagery and ice maps from the US National Oceanic and Atmospheric Administration (NOAA), informs specialized ice routing software and an onboard scout helicopter helps the Charcot find its way through the ice pack, taking advantage of breaks in the ice called polynyas that offer the path of least resistance. 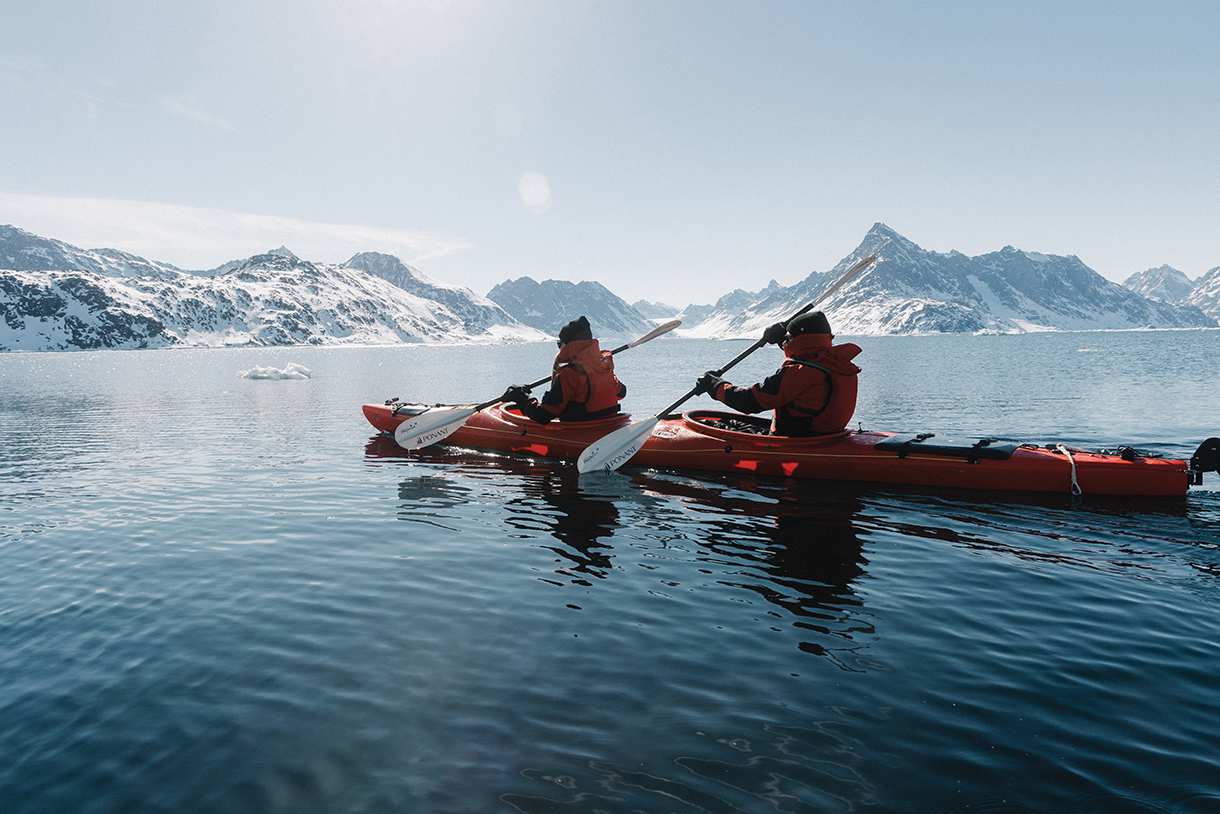 The Arctic is a study in ice and while it may at first appear to be a vast white frozen desert, the ice is actually extremely variable. Icebergs are formed from broken-off pieces of freshwater glaciers and may be surrounded by sea ice, with the oldest bits sometimes having an otherworldly blueish or greenish tint. Much of what the Charcot encounters is sea ice, which freezes at a lower temperature of around minus 2 degrees Celsius (28 degrees Fahrenheit). Sea ice gets various names depending on its age and texture: A newly frozen thin film that can support the weight of a bird is called frazil ice, and there are numerous names for the ice in its formative stages.

The solid layer that begins to form is called pack ice, and the boundary between open water and the pack ice is called the ice edge. Other variants include pancake ice—large circles of ice. Hummocks are piles of broken ice, often quite large, forced upward by pressure that can block progress, as can bergy bits and growlers, smaller pieces of very hard floating ice that can be tough to spot. Aboard Charcot, a low-tech but reliable stick gauge attached to the side of the ship and easily visible from the bridge measures ice thickness.

The polar sky is a helpful navigation aid as well—dark bands in the sky are reflections of open water, while white bands are indicative of ice—ship captains prefer the former while dogsledders or mushers like the latter. In practice, this doesn’t mean always avoiding large white spaces on the chart. The Charcot will search for an ice floe big and thick enough to allow passengers to disembark for an exhilarating hike, chaperoned by veteran expedition guides, across the slightly crunchy ice underfoot. In more open water, kayaking is an option. Zodiac boats also are used to ferry passengers on various excursions. The ship supplies a warm parka, life jacket, and knee-high boots for off-ship trips, but passengers are expected to bring their own waterproof pants, gloves, hats, sunglasses, and other cold-weather kit. 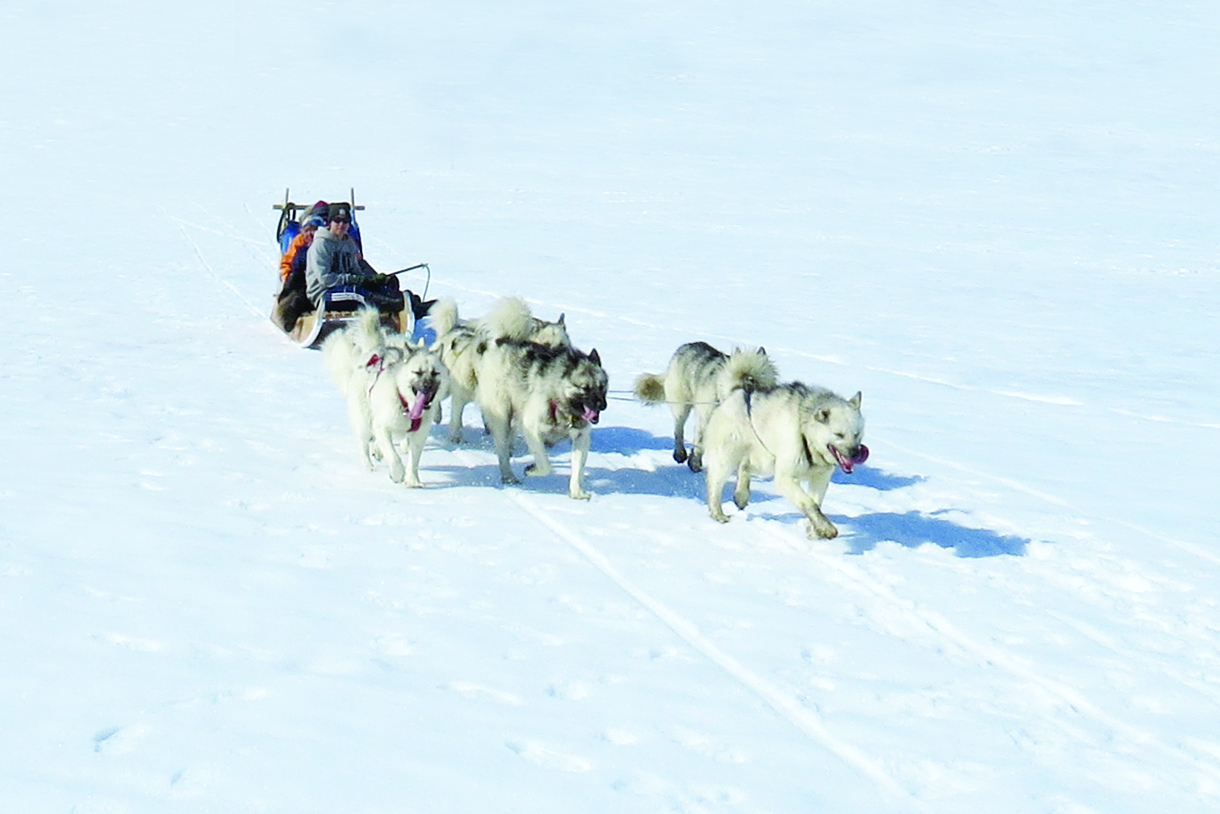 The one planned stop in Greenland is at the small Inuit village of Ittoqqortoormiit, population 254, one of just two settlements on the east coast. The village is reached by sailing north past a region choked with ice floes called the Blosseville Coast, named for a French explorer who vanished here along with his ship’s crew, and into Scoresby Sound, the longest fjord on Earth, which is ice bound upon the Charcot’s arrival. While the Charcot punches its way through the ice relatively close to shore, dogsled teams ferry passengers on the final leg to land. The astute will notice that Greenland sled dogs don’t form up in pairs. Greenlanders travel on sea ice so the dogs are aligned in a more spread-out fashion—if one dog should fall into a hidden crevasse, it won’t take the whole sled and the other dogs with it.

Any polar bear sighting is always a reason for an unscheduled halt, no matter the time of day. Polar bears living on the southern half of the East Greenland coast are attracting the attention of scientists, as they appear to represent a distinctive sub-population that is adapting to fewer days of sea ice by using icebergs broken off from glaciers that persist most of the year as a hunting lodge of sorts. A strong, cold current running south from the Arctic Ocean brings icebergs within reach, serving as a base for pursuing seals, their primary food source. Scientists estimate that only about 26,000 polar bears remain across the expanse of the Arctic.

Other stops may seem random, but they are not. Traveling free of charge on the East Greenland voyage is a team of scientists under the supervision of science officer Daniel Cron. The ship stops periodically so the scientists can test the waters for toxic algae, oxygen levels, and microplastic pollution. As the Charcot will visit East Greenland annually, a long-term record can be compiled, an important undertaking as such climate change data in the Arctic is scarce. Most scientists agree that the loss of sea ice due to warming temperatures means climate change is occurring in the Arctic at a much faster clip than the rest of the planet. What’s called the “sea ice minimum” is occurring later in the year as the melting season lengthens.

“When you think a luxury cruise, you don’t think science,” says Cron, the first science officer attached to a cruise vessel. “It’s new.” Onboard laboratories with sophisticated equipment were part of the ship’s construction from the beginning. “What we discover here will affect everyone later,” says Cron. Roald Amundsen, the famous Norwegian who ventured to both poles and the Northwest Passage in the early 20th century, is Cron’s favorite polar explorer. Everybody on board the Charcot has one.

Microplastic pollution is a particularly hot-button issue. Scientists know that tons of microplastic is dumped into the ocean annually, but “the location of 95 percent is unknown due to a paucity of information,” says Aaron Beck of the Geomar Helmholtz Center for Ocean Research from his onboard lab. “More data equals less uncertainty.”

The onboard scientists share their work with passengers in a series of briefings. Microplastic pollution along the remote East Greenland coast appears to be absent, but that’s not the case as the Charcot sails further east and north to Svalbard, Norway, where ship traffic and a warm ocean current from the south brings both pollution and somewhat warmer temperatures in the mid-40s degrees Fahrenheit.

Svalbard is an island archipelago about halfway between Norway and the North Pole. Once considered a no-man’s-land, Norway administers Svalbard and the 2,400 residents from 51 countries living in one of the world’s northernmost inhabited areas. There are more polar bears in Svalbard than people, and the location is so remote that it was picked to house the doomsday Global Seed Vault, a massive collection of the world’s agricultural biodiversity. But Svalbard is where you’ll encounter the first ships since leaving Iceland, so it feels positively bustling. The Charcot stops for an excursion by Zodiac boat to a stunning glacier in Magdalenefjord. The next day it’s two other fjords called Poolepyten—aka Walrus Beach for the colony that lives there—and Trygghamma, before arriving at the town of Longyearbyen. This is where nearly everyone in Svalbard lives, on the largest island of Spitzbergen, and it’s the ship’s final destination for this particular cruise.

The Longyearbyen airport is the most northern place with regular air service. In the ice-free port, two passengers, both veteran Arctic travelers, converse on the observation deck while an LNG supply ship pulls alongside to refresh the Charcot’s tanks before it sails on to more polar adventures.

“Always,” says the other.