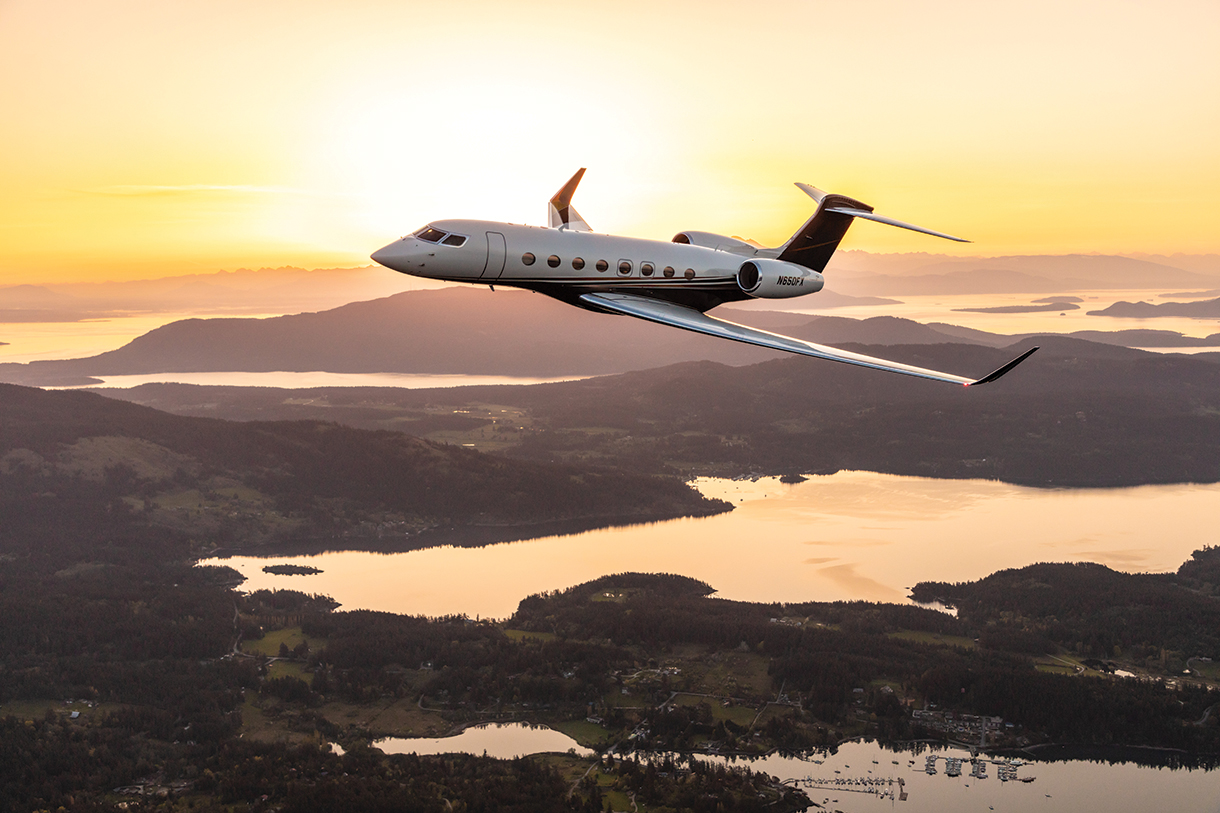 Amid economic tailwinds and unprecedented demand, private aviation’s top providers are in a race to lure customers into new jets with cabins designed to make every plane feel like home. 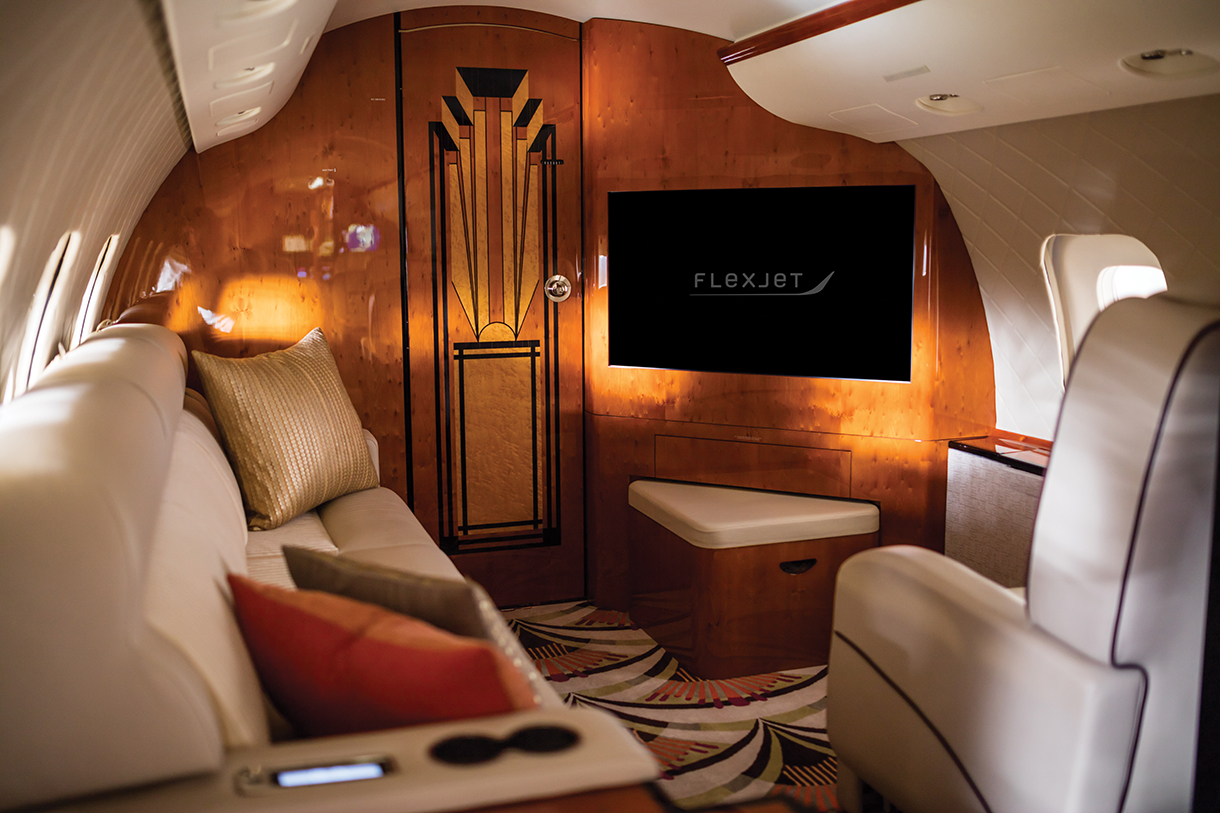 This is the most exciting time in private aviation in recent memory. Citing a strong economy for big business and subsequent enormous demand for private air travel, leading flight service providers continue to make multibillion-dollar investments in new aircraft. The goal of this aviation arms race is to attract corporate and private travelers into their programs with the most cutting-edge new jets featuring the latest avionics, best performance statistics, and most desirable comforts like flat floors and low-cabin altitudes. As those planes enter service and join the fleets of industry leaders—including NetJets, Flexjet, and VistaJet—the levels of safety, reliability, and service are soaring to new heights. But the most noticeable perk of these new aircraft is the sense customers get every time they step on board.

“Safety and service remain the top priorities far above everything else,” says Patrick Gallagher, EVP of sales and marketing for NetJets. “But you have to keep in mind that our customers turn right at the top of the steps. We’re trying to provide a smart alternative to owning your own jet, so a consistent cabin experience is absolutely critical. We want you to feel like this is your aircraft and not one that you’ve rented for the day.”

Fractional aircraft ownership has always presented a cost-effective alternative to owning an entire business jet, but today’s private aviation consumers want to feel like every jet they fly is their jet and so a consistent cabin experience is a big draw. Even smaller fractional providers, like Nicholas Air, which owns and operates a fleet of nearly two dozen aircraft, have made considerable investments in customizing the experience. By building personal relationships between passengers and crew and giving aircraft matching paint jobs, these companies provide fractional shareholders the sense of owning the plane, even when they utilize multiple aircraft types. Nicholas Air and larger industry leaders like NetJets are making greater efforts than ever to deliver that experience, with the help of a new generation of business jets equipped with cabins designed to make travelers feel at home, regardless of the mission or aircraft model. 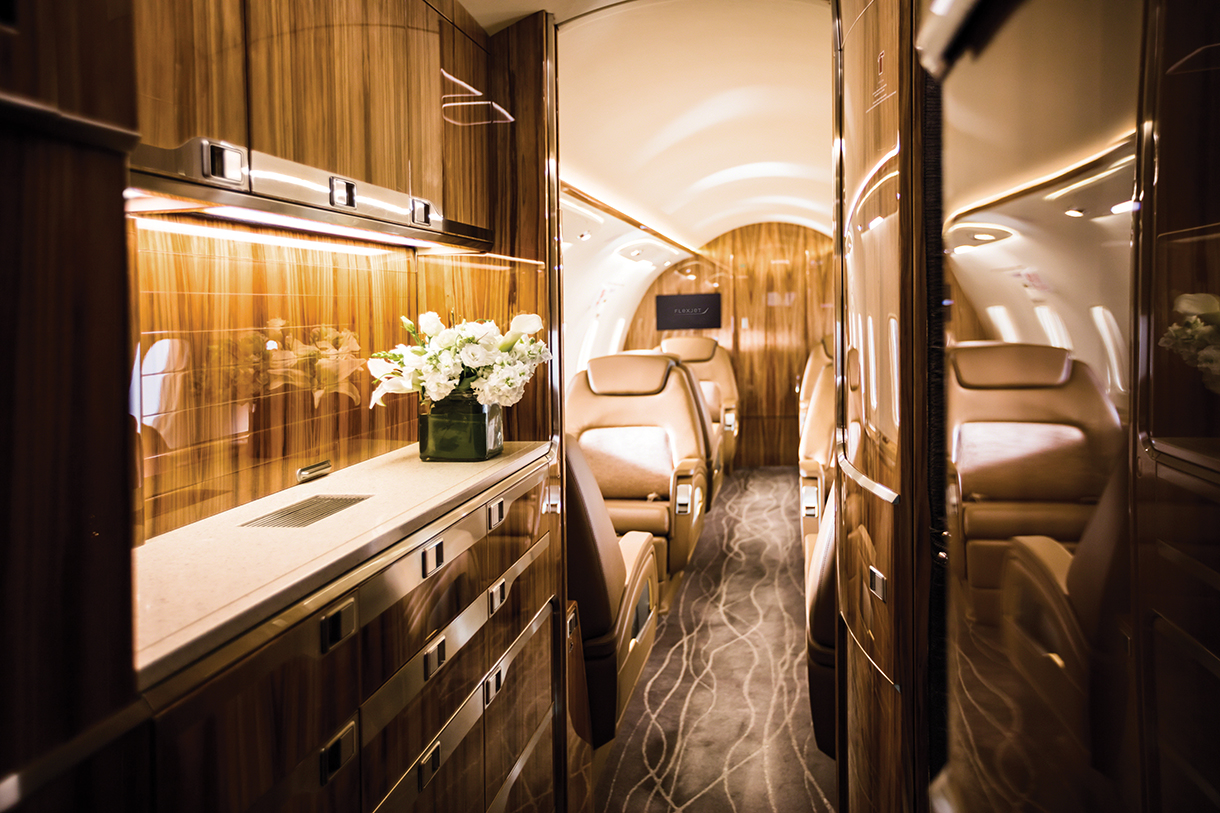 “Our customers are actually looking for more luxury,” says Megan Wolf, chief operations officer of Flexjet, the second-largest fractional provider behind NetJets. “So, we wanted to make an investment in the quality of the interior products, like something you might outfit your own jet with. Customers want every flight to feel like an experience that’s tailored to them.”

To give customers that experience, both NetJets and Flexjet have made huge investments in new aircraft. In 2012, NetJets ordered $2.5 billion worth of new jets from Bombardier and Cessna. To date, the company has taken delivery of 300 of those aircraft, with 60 more scheduled to enter its fleet this year. Late last year, NetJets announced plans to continue its fleet expansion with Cessna by ordering an additional 175 Citation Longitude super-midsize jets and 150 Hemisphere large-cabin jets worth nearly $10 million. Meanwhile, Flexjet, which says it has the industry’s youngest fleet, has anted up with orders for 40 Challenger 350 super-midsize jets from Bombardier, worth more than $1 billion, as well as 50 planes from Gulfstream worth $2.5 billion. At press time, Flexjet was reportedly in talks with Gulfstream to add another billion dollars’ worth of jets to that purchase. The company also continues adding Embraer Phenom 300 and Legacy 450 midsize jets to its fleet as part of a 2015 order. Flexjet is also the only provider currently betting on breaking the sound barrier: It has ordered 20 of Aerion’s AS2 supersonic business jets, currently in development and scheduled for flight in 2023. 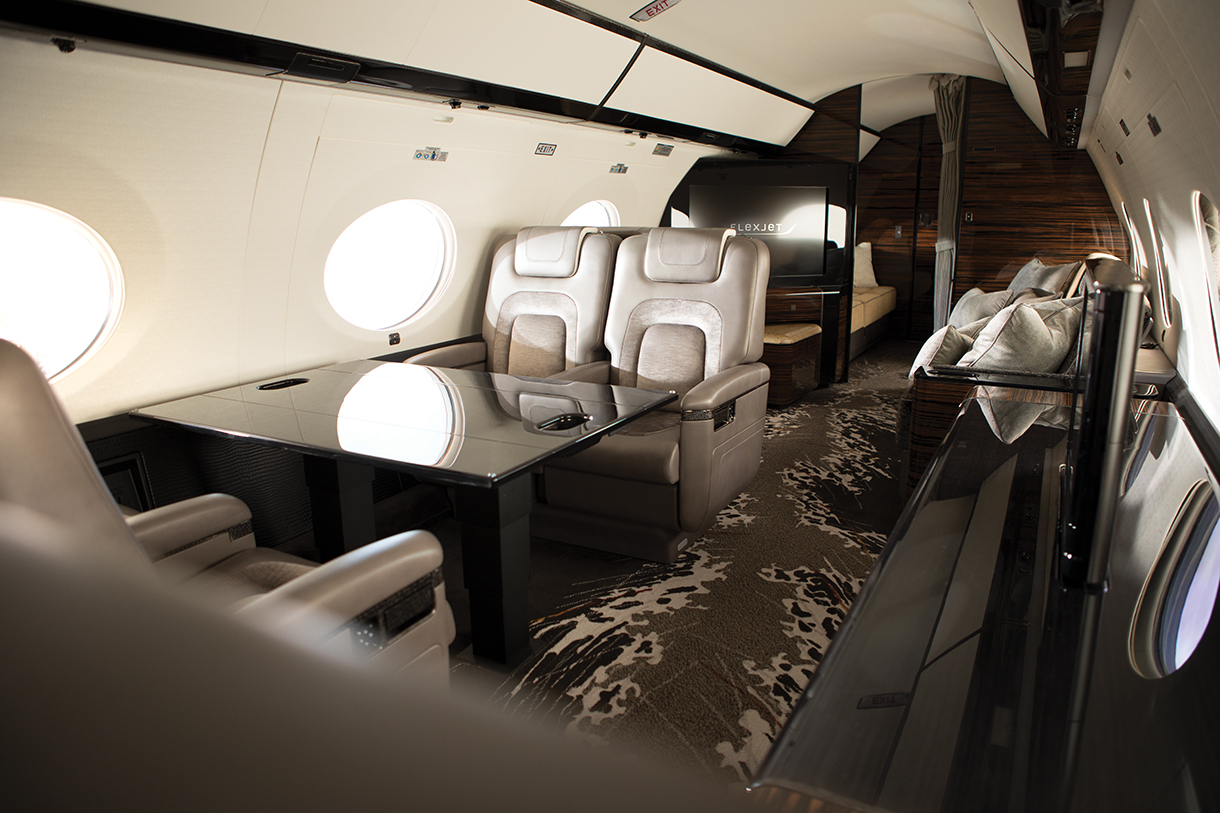 Courtesy Flexjet.
The Cosmos interior of the Flexjet G650

Another fleet to consider is that of VistaJet, which offers global private flight solutions and has an increasing US presence, which it furthered last fall with the purchase of XOJET, a leading on-demand services platform in North America. VistaJet’s membership-based model presents an alternative to fractional ownership, granting access to an entire fleet while paying only for the hours you fly. And while both NetJets and Flexjet offer non-ownership solutions, the Bombardier aircraft in VistaJet’s fleet are on par with those in its competitors’ fractional fleets. Back in 2012, VistaJet ordered nearly $8 billion worth of Bombardier jets to advance its fleet globally, and founder and chairman Thomas Flohr will take delivery of his first Bombardier Global 7500 large-cabin, ultralong-range jet later this year.

As all three companies continue taking delivery of these new planes, they retire their more dated aircraft, which is a major benefit to today’s private jet travelers. In the early days of fractional ownership 40-plus years ago, jets in these programs were treated almost like time-share properties, where a group of people each owned a share in the jet and split the cost of ownership. However, when one shareholder was using the plane, the other shareholders were forced to access other jets in the fleet, which was managed by a company like NetJets. Those aircraft were owned by different sets of fractional shareholders and were often dated with cabins of varying designs. Whenever a passenger stepped on a plane, they felt like they were a guest rather than an owner. Since then, NetJets and other service providers have made strides to develop fleet consistency. NetJets says that it has offered a degree of consistency across its aircraft types (midsize, large-cabin, and so on) since the beginning, but for it, Flexjet, and VistaJet, the new and forthcoming aircraft take cabin consistency to new levels.

“When you board one of our airplanes, the Wi-Fi name is actually your aircraft’s Wi-Fi,” says NetJets’ Gallagher, who goes on to note that the new cabins, with subtle differences, have the same leathers, carpeting, headliners, and even arrangement. “We want you to board that aircraft and know where your favorite snacks are and exactly which drawer the Diet Coke is kept in.” 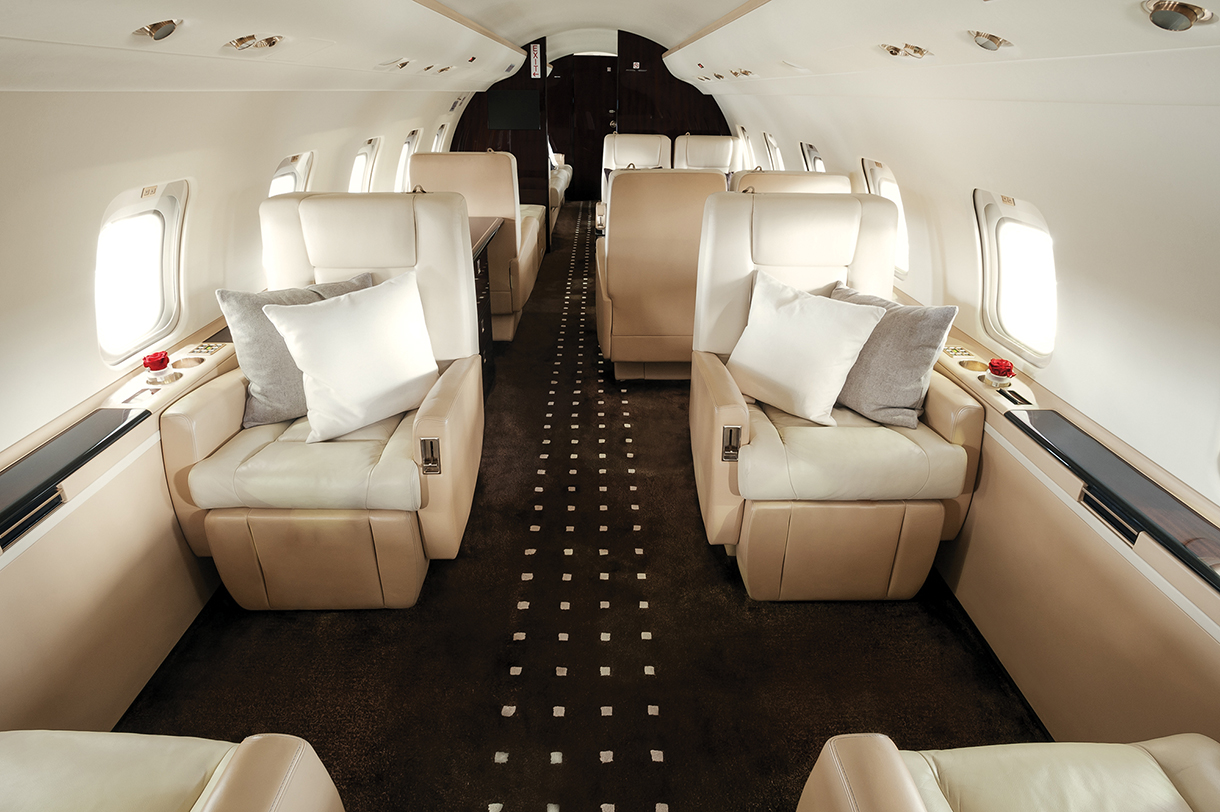 NetJets designs its cabins to be virtually identical, regardless of aircraft model, with colors and materials that are calming and neutral, which many travelers appreciate. VistaJet takes a similar approach to cabin consistency. But Flexjet has taken a decidedly different tack. “Flying private should be something special,” says Flexjet’s Wolf. “It should be an experience. It shouldn’t feel the same as getting on board a commercial aircraft.”

To that end, Flexjet created the LXi collection of cabin designs for its Red Label program, which launched in 2015. Flexjet’s approach to fractional ownership, Red Label provides crews that are dedicated to specific aircraft; the company says it is the only provider offering dedicated crews. All of its Red Label aircraft feature LXi cabins and the company is constantly evolving those designs. The LXi cabins—for light, midsize, and large aircraft from Embraer, Bombardier, and Gulfstream—employ richer materials and cabin designs that, according to Wolf, its clients might also use in their home, cars, or yachts. Indeed, the LXi interiors feel more like the inside of a Rolls-Royce than an aircraft cabin.

“We set out to create a unique experience for our owners that you can only get from owning your own jet,” says Wolf. “For some owners, it just isn’t feasible to own, but that doesn’t mean you don’t want that same level of luxury.”