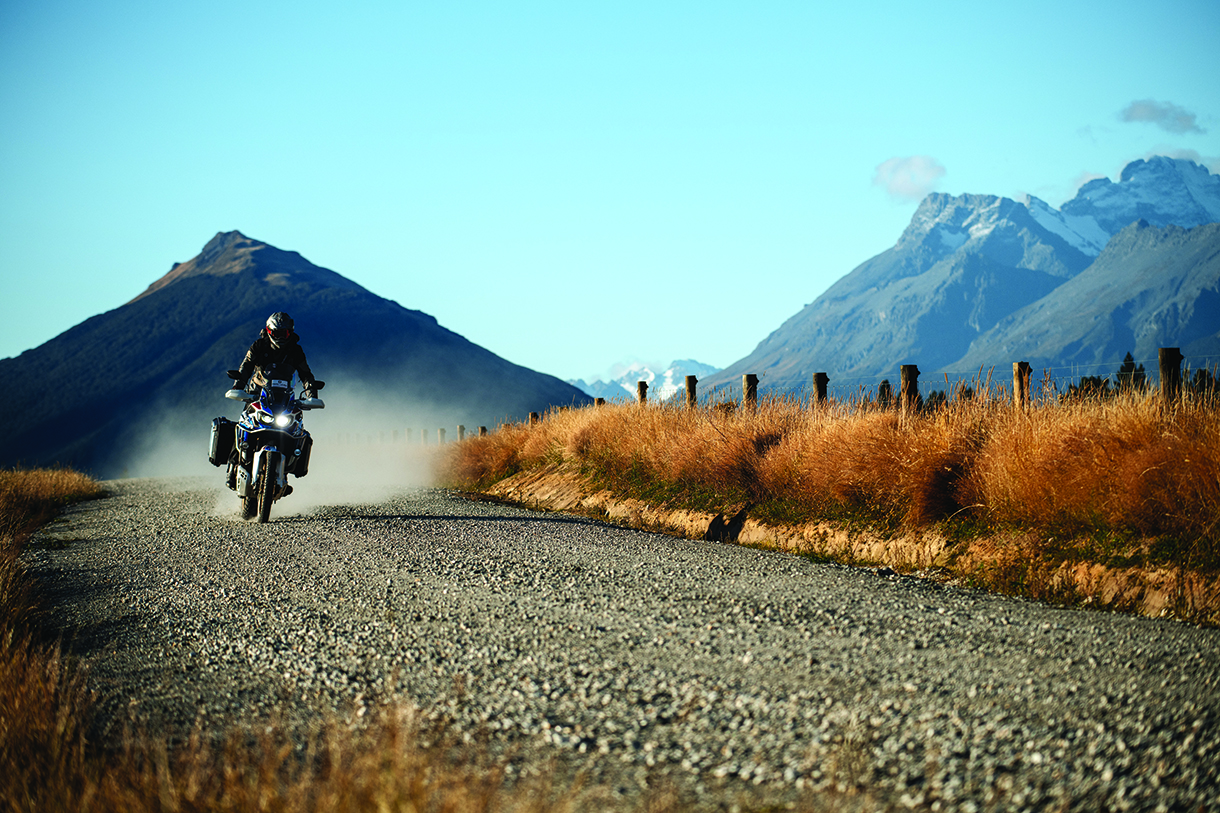 Scramble Through the Southern Alps

A week-long rally on an off-road motorbike through New Zealand’s rugged South Island.
PHOTOGRAPHED AND WRITTEN BY CHRIS BRINLEE JR

scram·ble
verb • make one’s way quickly or awkwardly up a steep slope or over rough ground.

noun • a difficult or hurried clamber up or over something. A week-long rally on an off-road motorbike through New Zealand’s rugged South Island offers more than dramatic landscapes and stunning scenery—it’s a bucket-list adventure on a path less traveled.

AS THE SUN FALLS BEHIND THE OCEAN,

its golden light fades to blue over the mountainous landscape. High in the hills against the darkening sky, white glaciers cast a remarkable glow until starlight overtakes the view. The scene is merely the icing after a day of sweet solitude, following sweeping curves and open roads by motorcycle through steep valleys, enchanted forests, and coastal plains.

On day five of a self-guided, eight-day adventure tour around New Zealand’s Southern Alps, a campsite materializes along the shores of a tranquil lake. The multiday riding trip has been mentally and physically exhausting, yet camping here is a deliberate choice. One of the world’s premier adventure lodges is just up the road, tempting the weary with deep-soaking tubs and private chef services.

While distances on maps in this country seem short, getting anywhere takes a long time because of the twisty roads, slow speed limits, and summer caravans of RVs that are difficult to pass. Then, even the most well-planned, well-paced route will run into changeable weather because New Zealand, for all its dramatic beauty, will inevitably throw a curveball.

Former pro dirt biker and actor Gunner Wright describes these Alpine spoils as the opportunity to “ride all of the best terrain in the United States: rolling hills, coastal seascapes, twisty backroads, rural farmland, and urban scenes—but in the period of a week.” That makes sense given that California alone is twice the size of the entire country. Another bonus: Day rides can be linked by unique, often luxurious accommodations. Campgrounds and five-star lodges included, each place operates under the pretense of sustainable practices and enables travelers to develop an intrinsic connection to their natural surroundings. 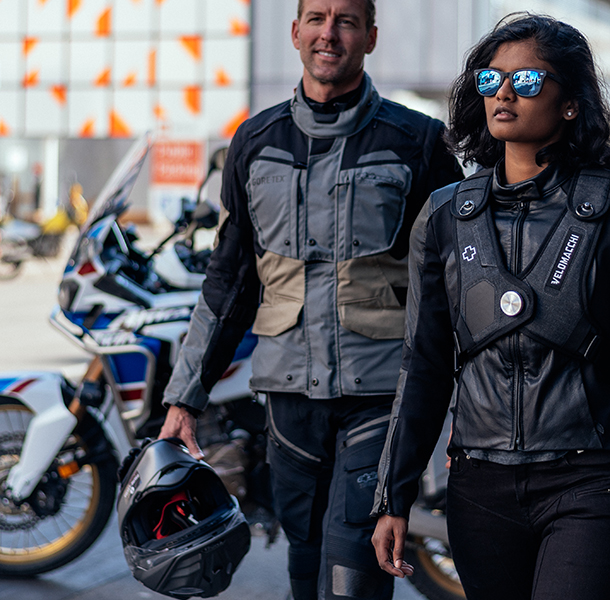 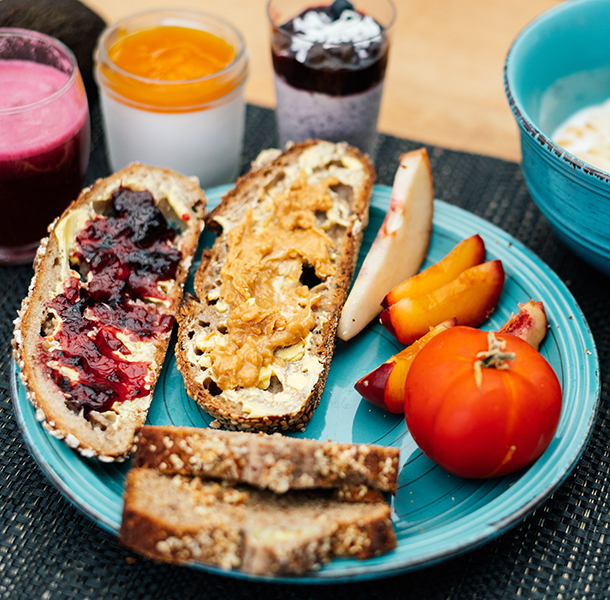 A logical starting point for the Southern Alps scramble is Christchurch, located on South Island midway up the east coast. New Zealand Motorcycle Rentals & Tours (nzbike.com) outfits customers with adventure bikes like the Honda Africa Twin ($140/day), which was just reintroduced after a 13-year hiatus. With a 998 cc engine that revs up to 94 hp, the bike was designed specifically for exploring on and off-road—a requirement for the journey ahead. The size and seat height of any adventure bike can be a lot to handle, but this one especially delivers the comfort needed for an extended ride.

Says Wright, “Do proper research on the bike that you will ride beforehand, so that you are familiar with its controls and characteristics before taking delivery. You may have to adjust your riding style and route depending on the type of bike and its tires.” Wright recommends wearing proper riding gear and packing light while also being prepared for variable weather conditions. Summertime temperatures can soar as quickly as they drop, so it’s not uncommon to experience chilling rain or snow.

From the bike shop, head to Bowenvale Park, the city’s highest point with sweeping views of Christchurch, the bay, and the snow-capped mountains ahead. From there, suburbs quickly transition to farmland and then to the Rakaia Gorge Bridge over turquoise-colored waters, foreshadowing what’s to come. Rejoin the coast at Timaru (stop for lunch) and finish the day’s 180-mile ride at Valley Views Glamping (valleyviews.co.nz).

Hosts Patrick and Amber Tyrrell show guests to geodesic domes, situated as the place’s name suggests. Within each one, beds are piled high with down duvets and wool blankets. Family-style meals in the communal lodge come alongside quality conversations. Patrick, a South African, and Amber, a Kiwi, met in Israel while backpacking around the world before settling down where Amber was raised. 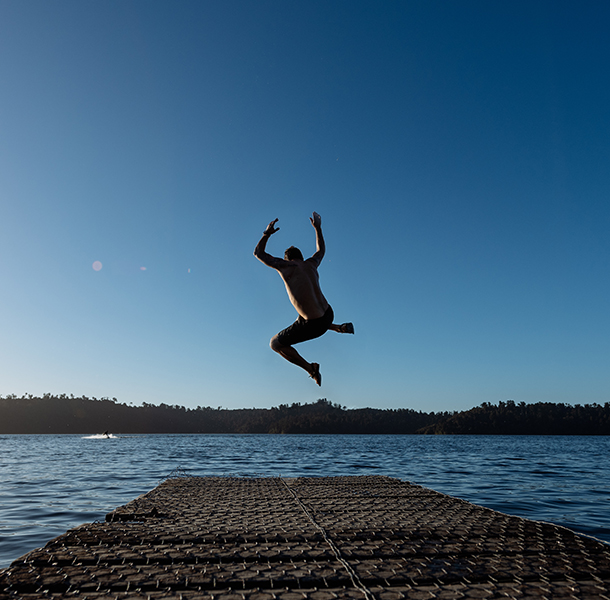 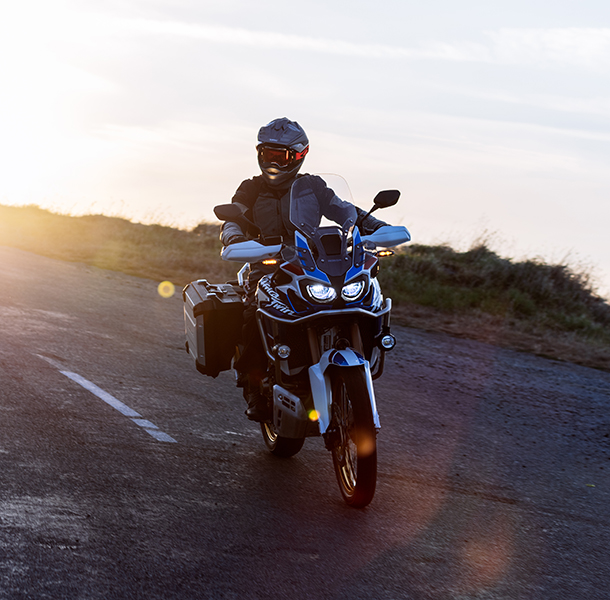 Inspired by a safari experience in Patrick’s native country, the Tyrrells built with sustainably sourced materials, recycle studiously, and source food locally (the eggs come from down the road, where they’re hatched by free-range chickens at Amber’s brother’s farm). Outdoor baths among the trees are heated each night before guests retreat to their planetarium like rooms.

From there, it’s a 142-mile ride to Queenstown through the vast, rolling hills of Central Otago and Danseys Pass, where an unsealed road tests riding skills for the reward of climbing through sub-alpine forests and past the tree line to glimpse expansive views. Find lunch in the historic mining town of Clyde and continue through Kawarau Gorge. The highway here winds in sharp turns along the river of the same name, which is the most voluminous, commercially rafted waterway in New Zealand.

Stop in Queenstown, nicknamed the “adventure capital of the world” for its bevy of extreme sports outfitters. Stay at one of several lakefront, world-class hotels, including Matakauri (robertsonlodges.com); Eichardt’s Private Hotel (eichardts.com); and QT Queenstown (qthotelsandresorts.com), where restaurant Bazaar is known for its interactive and theatrical displays of international cuisines.

The next morning is an early one; take a sunrise ride to the Routeburn Track. The hike, among the most dramatic and accessible sections of New Zealand’s Great Walks trail network, begins in the enchanting Beech Forest, which quickly gives way to valley views before a high-alpine scape dotted with tarns. Routeburn Falls lies about six miles in and, if there is time, hikers continue to Harris Saddle—the highest point of the track—for a panoramic outlook over the nearby Darran Mountains (featured in the helicopter chase scene for Mission Impossible: Fallout). By nightfall, return to your bike and ride to the nearby settlement of Glenorchy. 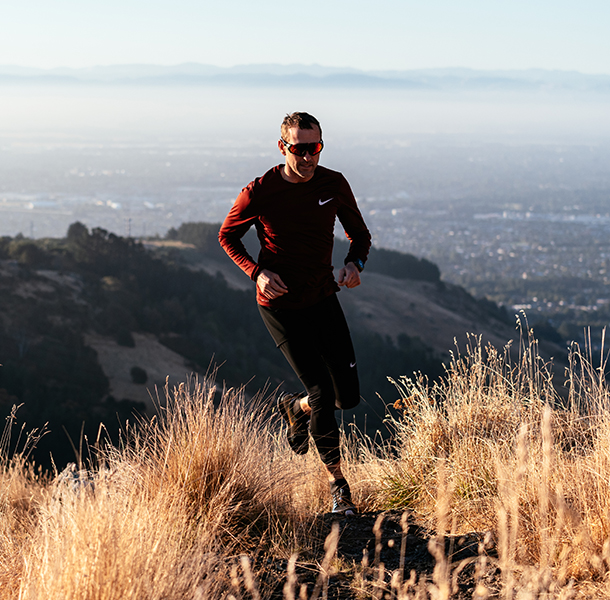 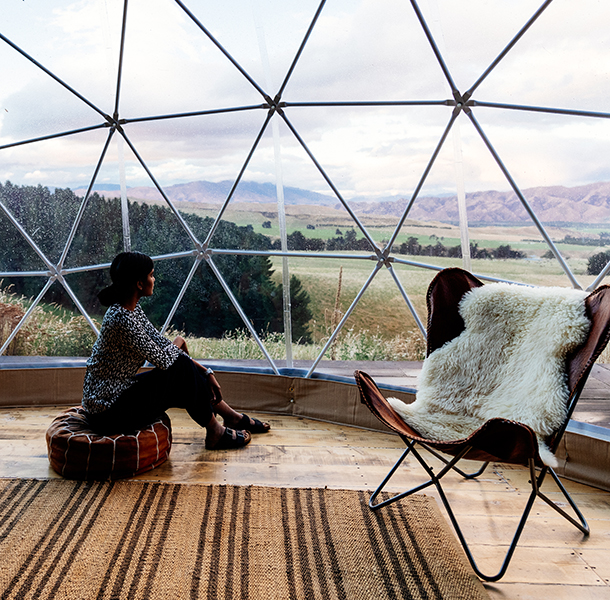 Visitors might recognize the scenery around Camp Glenorchy (theheadwaters.co.nz), opened in 2018 by an American couple from Seattle and situated where Isengard was filmed for Lord of the Rings. Well-manicured grounds and creatively decorated private cabins and bunk rooms are arranged around centralized common areas and are comfortable, but nothing fancy. A shared kitchen, dining room, and outdoor fire pit foster the welcoming, community feel of the place, which boasts the country’s first Net Zero Energy accommodations (using as much electricity as they generate through solar farming). The innovative building designs, which use 50 percent less water and energy than similar facilities, are displayed in each room to educate guests.

The next day requires backtracking to Queenstown and then following the Crown Range Road over the saddle of the same name—one of New Zealand’s highest. Continue into the Cardrona Valley where the roads are windy and, if you can find an opening free from traffic, the riding is bliss. Follow that highway down into Wanaka, Queenstown’s less-busy sister city, and stop for lunch along the lake. Spend a night at Whare Kea Lodge & Chalet (wharekealodge.com), Wanaka’s most decadent stay, or continue riding for another hour to Cameron Flat where the simple campsite has been dubbed “the Five-Billion-Star Hotel.”

Shake off the fatigue after setting up the tent for a 30-minute sunset hike to the Blue Pools to witness the gorgeous effects of water passing through a canyon for thousands of years. Sunrise from Cameron Flat is as good as it gets, so soak it in while packing up camp and then hitting the pavement. 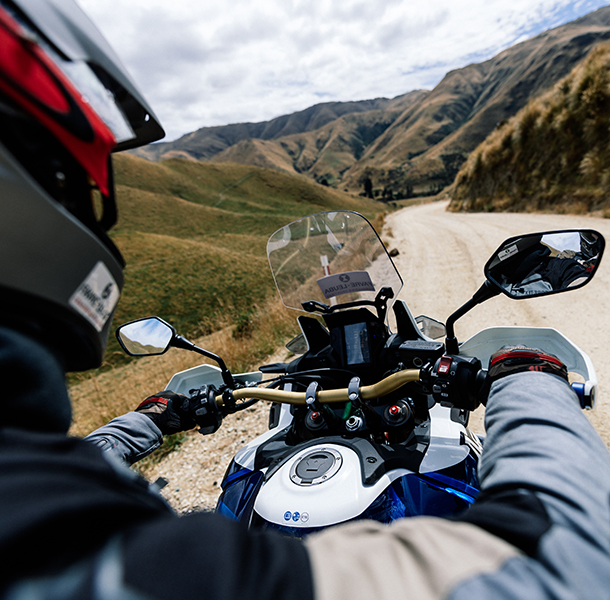 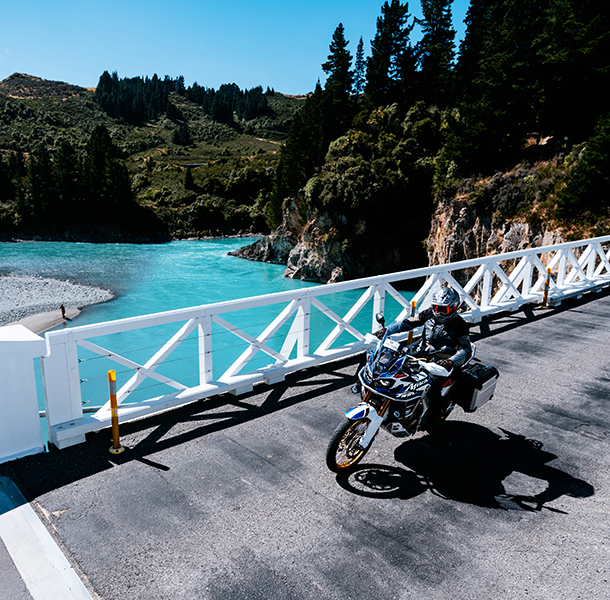 In the first hour of the ride, cross Haast Pass, the Southern Alps’ continental divide. Herein lies the journey’s just desserts. New Zealand’s West Coast is known for its rugged remoteness, its dramatic relief, glaciers that stretch nearly from summit to sea, and its numerous beaches. Trees and shrubs grow closer together here and everything is green due to the high amount of average rainfall that the area receives. Slow down to take in the views at Bruce Bay (where the tide breaks into the highway) and continue into Fox Glacier township. The guide service of the same name facilitates a closer look at the ice, which is rapidly receding and will soon disappear.

For the last night, choose between Te Waonui Forest Retreat (tewaonui.co.nz) in Franz Josef Glacier and Lake Ianthe Campgrounds (westcoast.co.nz) another hour’s ride up the road. Lakefront sites make the water tempting for a quick dip. When the sun rises, the homestretch over Arthur’s Pass awaits and Christchurch is a mere two hours away. The pass is the highest (3,018 feet) of only three roads crossing the Southern Alps. As such, it’s no surprise that riding it is par for the course on this tour. The Great Alpine Highway turns quickly inland while tracing a feeder river to the Tasman Sea. The landscape changes from delta and West Coast bush to steep foothills covered in beeches, and, before long, riding over the impressively constructed Otira Viaduct allows for safe passage through a series of volatile and dangerous gorges and high mountain slopes. To delay the inevitable, stop to hike Castle Hill where dramatic rock formations touch the sky and dozens of paragliders float down to earth as the sun sets on the horizon.