Find Ways to Reboot, Reset, and Relax in the LM Wellness Guide 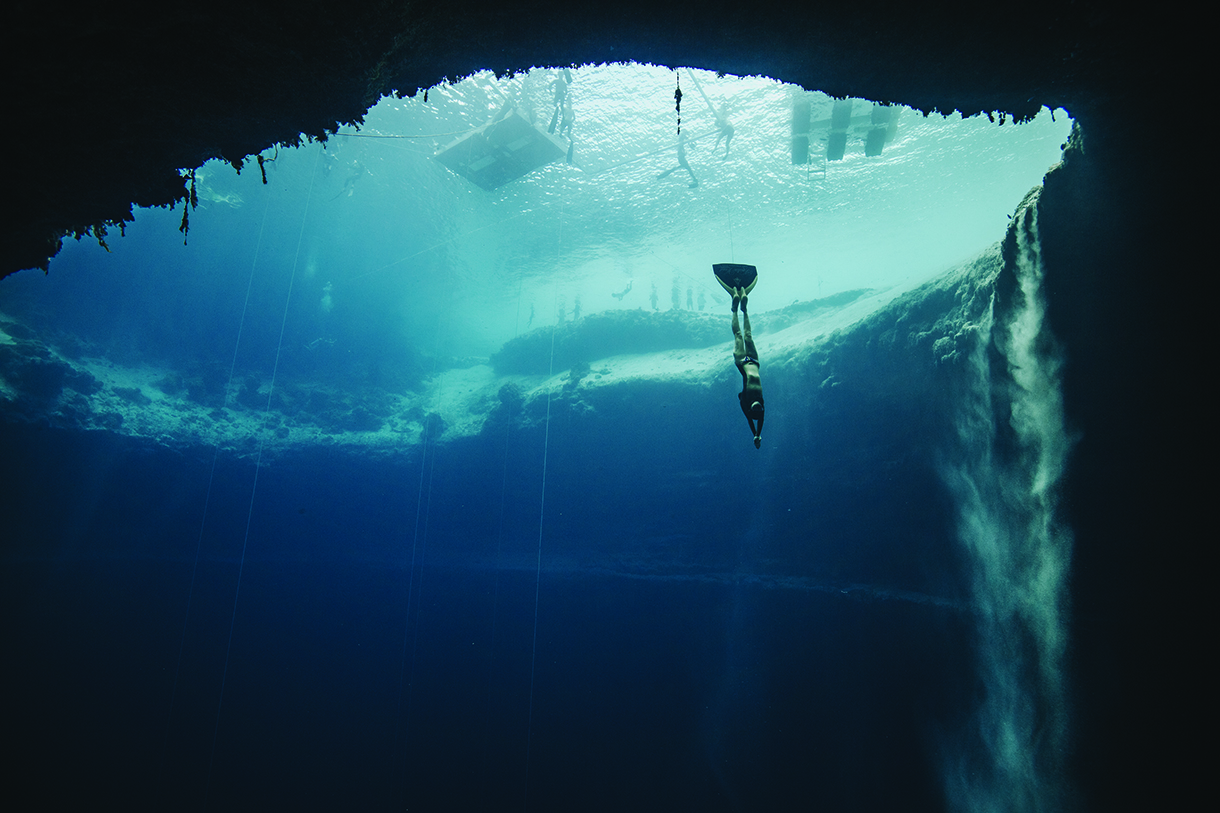 Free diving is a sport that pushes the body’s limits to the edge.

In 1949 Italian spearfisher Raimondo Bucher boasted he could dive down 100 feet on a single breath. Scientists at the time believed that the pressure involved in free diving to that depth would rupture a diver’s lungs. So Bucher bet fellow diver Ennio Falco 50,000 lira that he could do it.

In full scuba gear Falco dove 100 feet, and watched as Bucher swam down, unaided, to win the bet and overcome hundreds of years of fake science. The modern sport of free diving was born and by 1976, free diver Jacques Mayol became the first man to break the 330-foot dive mark.

There are now eight official sub-disciplines of the sport. The more extreme versions use weighted sleds, allowing divers to go deeper on a single breath than most submarines. The more common discipline, called constant weight, involves following a guide rope down with the help of fins, a small amount of diving weight, and a mask. The current US record holder, Daniel Koval, reached a depth of 102 meters (335 feet) on a single breath.

Koval teaches a two-day course at the Four Seasons Resort Oahu at Ko Olina that delves into the intricacies of constant weight free diving: from the physiology of the sport to the secrets of tapping the mammalian dive reflex (how the human body avoids drowning).

For most people, training to hold their breath for two to five minutes is mental, not physical. Human lung capacity contains about a third of the available oxygen in the body, while the rest occupies the bloodstream and muscles. In training, free divers learn how to first “breathe up”—taking deep, slow inhales, with even slower exhales (think yoga breathing), to fill the lungs and bloodstream with oxygen. Divers take a series of these deep breaths right before going under. The longer or deeper they intend to go, the more breaths they do. Certification as a free diver requires reaching 20 meters, or 66 feet, on a single breath.

In Koval’s course, the infinity-edge pool at the Four Seasons accommodates static apnea practice, when divers breathe up while holding on to the edge of a pool. Then, they put their faces down in the water and try to hold their breath. Every 30 seconds, Koval gives a tap on the back to check that they’re still conscious. To go deep, free divers must disregard the warning bells firing off in their heads.

Most of the body’s physiological reactions to breath-holding are not due to a lack of oxygen (remember, there’s plenty of that floating around the body). Instead, the brain screams about the buildup of carbon dioxide and the fact that there is air just above. The convulsions that come on like strong hiccups will pass after about a minute, so the key to pushing through is tapping into an inner calmness called the mammalian dive reflex (see page 112, “Hold It!”). Once that kicks in, holding one’s breath longer is far easier than imagined.

Graduating from the pool to the Four Seasons lagoon means taking to deeper, calm waters and a sandy bottom—a safe space for making practice dives. The technique of the dive itself is pretty simple: After breathing up, swimmers must keep their heads straight to remain as streamlined as possible, hold their arms at their sides, and kick straight down into a classic surface dive. Since the beach cove is only 10 feet deep, the bottom is reached pretty quickly.

To wrap up instruction on day one, Koval teaches participants to clear their ears. In scuba, a constant flow of air clears the buildup of air pressure in the ear canal when divers pinch their noses and forcefully breathe out. This is called the Valsalva technique. Free divers use the Frenzel maneuver, where they pinch their noses, close the back of their throats, and make the sound of the letter “K.” If done properly, quickly, and frequently during a free dive, the pressure will easily clear. 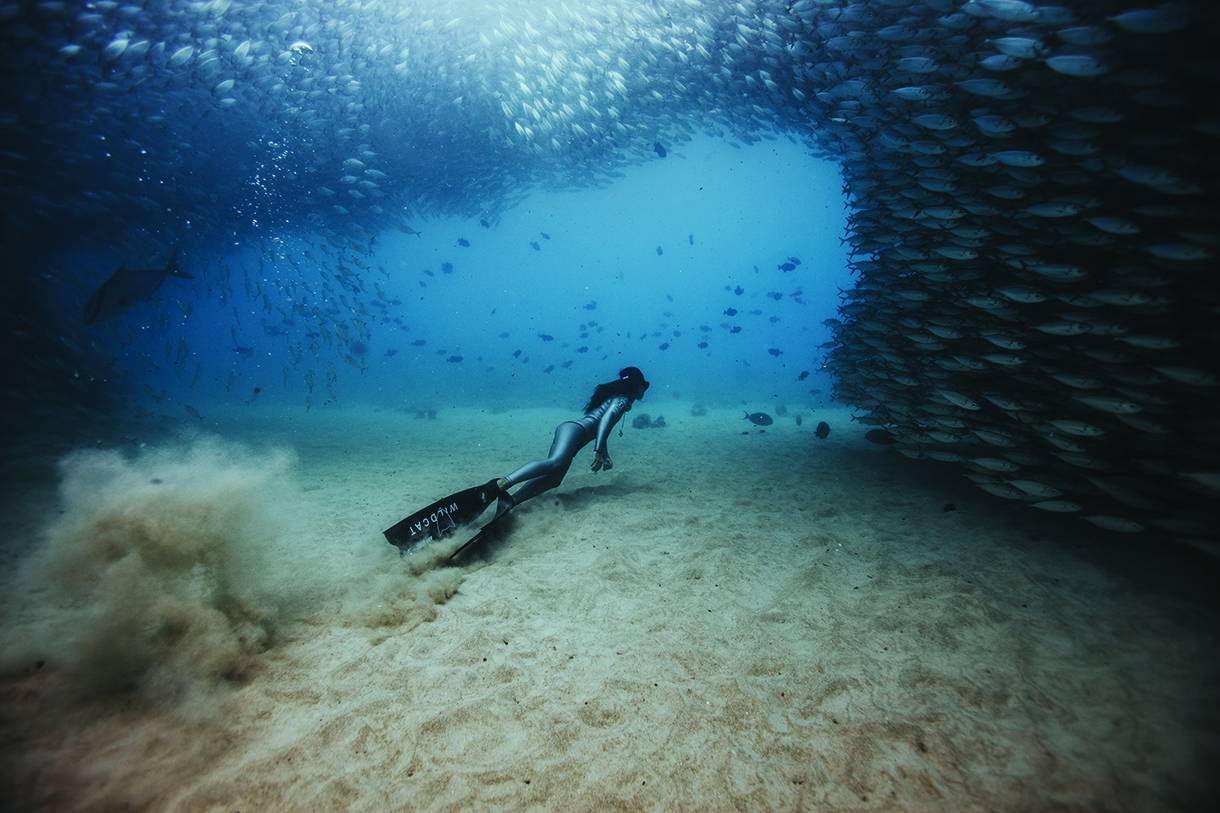 The itinerary on day two is straightforward: dive; stay alive. Koval and his partner, Kristin Kuba, take clients to the Mahi wreck, a freighter that sunk off the coast of Oahu. The shallow part of the Mahi, which teems with ocean life, is just below 66 feet. On the way out, Koval tells stories about sharks.

Apex predator sharks, as in oceanic whitetips, measure up to 15 feet long and are on the short list of dangerous fish. They have a binary view of the world: Everything is either predator or prey. If it’s prey, they eat it. If it’s another predator, they leave it alone—so the key for divers is to show the shark they’re another predator. While holding their breath.

According to Koval, who has tested the technique, the way to do this is to swim at the shark with arms extended outward to look like another predator. In theory, the shark will back down. At the wreck, Koval drops a 66-foot line tied to a buoy. His students hold the buoy as they breathe up and try to forget about sharks. They look down through the blue water at the wreck, trying to calm their minds and bodies as they load oxygen. When ready, they do a surface dive and kick their way along the line to 66 feet. If they reach that depth, they are a certified free diver.

The new popularity of free diving and novelty of packages like the one at the Four Seasons have brought to light a practice that has been around for generations. The Bajau people of Indonesia have been free diving for so long that their bodies have undergone genetic adaptations, including increased spleen size. Female pearl divers in Japan hold their breath for up to two minutes, swimming down to depths of 30 feet to collect pearl oysters, as they have been doing for hundreds of years. Alexander the Great used free divers as early as 332 BC to enhance his navy.

Learning the techniques and safety issues of a free diver opens up a new relationship with the sea—one that’s no longer tied to the surface by a snorkel or burdened with tanks, weights, or decompression issues. For recreational divers, achieving a maximum depth is not necessarily the goal. Instead, with most marine life living less than 50 feet under, divers confidently hold their breath while peacefully exploring new underwater worlds—as more than just an observer.