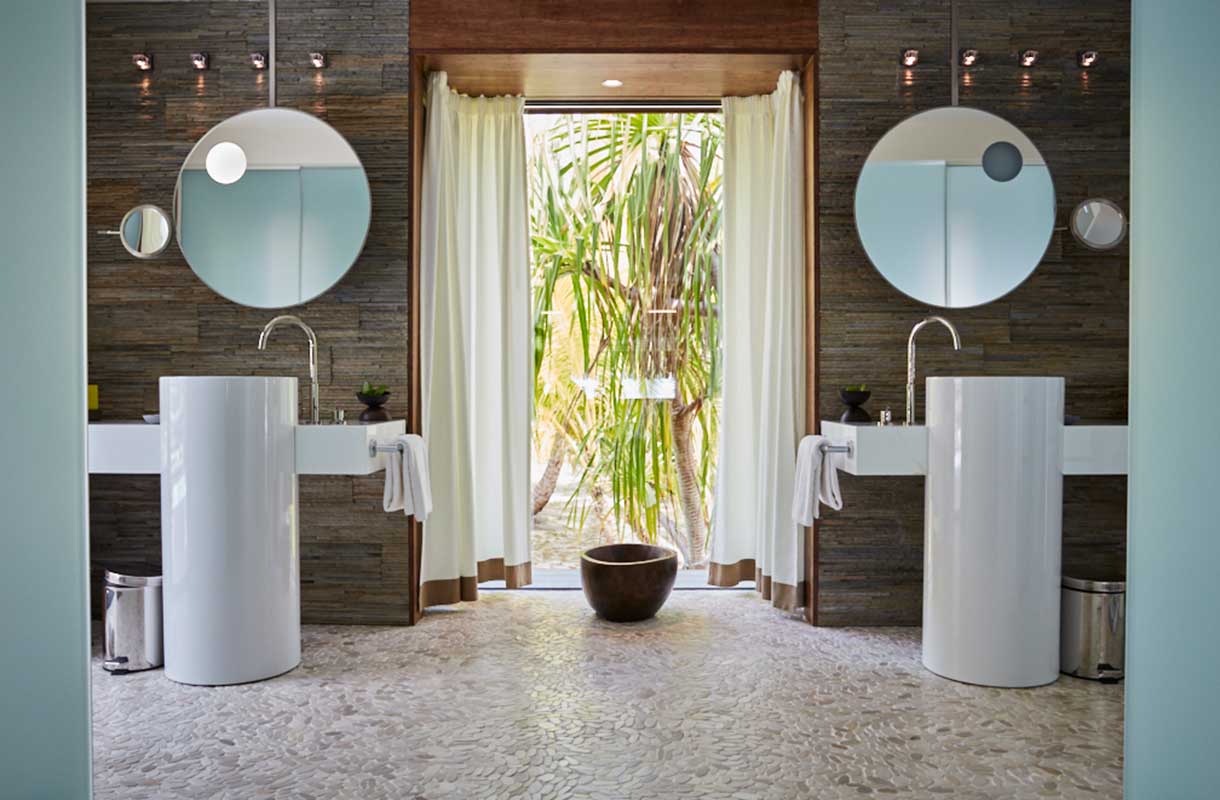 Tucked away on a jewel-like South Sea island, the 35-villa resort The Brando (thebrando.com) remains the ultimate hideaway for travelers seeking privacy. The palm-fringed paradise 30 miles north of Tahiti is ringed by an unbreachable coral reef and accessible only by private plane.

Marlon Brando first visited Tetiaroa atoll—12 islets encircling a lagoon—while scouting locations for Mutiny on the Bounty in the early ’60s. He fell in love with both the natural beauty of the place and that of his leading lady, a local named Tarita Teriipaia. Brando purchased the land from a North American dentist in 1967 and built an airstrip, bungalows, dining facilities, and a bar from local materials on one of the islands. An early and ardent environmentalist, he used his sanctuary to test planet-friendly initiatives like ocean farming.

Five years before his death in 2004, Brando asked hotel developer Richard Bailey, chairman and CEO of Pacific Beachcomber, to help him create a post-carbon resort. Today, the five-star property enjoys LEED Platinum certification, the highest green-building accolade. It was the first resort to achieve this and is arguably the most eco-correct resort on the planet.

The resort also funds the nonprofit Tetiaroa Society, which operates an ecostation on the island and partners with scientists on research into sustainable interdependence. As Brando once wrote, “If I have my way, Tetiaroa will remain forever a place that reminds Tahitians of what they are and what they were centuries ago.”

A model of conservation and renewable energy systems, the resort has spared no cost to protect the motu. The Brando produces two-thirds of its energy consumption from more than 4,000 photovoltaic panels. The rooms are cooled by a $12 million seawater air conditioning system (SWAC), an energy-efficient method that harnesses the cold of ocean depths.

The recycling program has won awards and the resort closes the loop by capturing rain and other types of water for laundry and landscape irrigation and treating it for the pools. Leftover food is composted for the organic garden, which in turn supplies the restaurants with fresh fruits, vegetables, and herbs. Even the honey served at the restaurants, sold in the boutique, and swirled in the signature cocktail at beachside hangout Bob’s Bar is produced on-site in more than 60 hives.

Just because the hotel is holistic doesn’t mean it compromises on comfort. Oceanfront villas are built from indigenous woods, decorated in soothing earth tones, and appointed with a private plunge pool, a screened al fresco bathtub, a media room, and an outdoor dining area. Visitors can maintain total seclusion by sunbathing on their villa’s personal beach.

To better appreciate what the resort’s unorthodox practices are protecting, guests can snorkel and dive in the resort’s coral gardens, home to an array of exotic fish, spotted eagle rays, sea turtles, and blacktip sharks. Water sport enthusiasts explore the three-mile-wide lagoon by paddleboard, kayak, windsurf, and Polynesian outrigger canoe. Picture-perfect exposure to the surroundings happens on the 2.5-hour Tetiaroa Ultimate Tour on a roofed boat with a guide. Stops include Billionaire’s Pool, a scenic spot marked by a sculptural branch arching out of the water.

Since all of the villas at the Brando are beachfront, visitors seeking overwater accommodations stay elsewhere. At The InterContinental Bora Bora Resort & Thalasso Spa (thalasso.intercontinental.com/villa-teremoana) find the luxurious Villas Teremoana. The one- and two-bedroom bungalows-on-stilts face Mount Otemanu, the mystical volcanic peak, and each opens to a large outdoor infinity pool and deck. To experience true Tahitian mana, a spiritual life force, simply climb down the ladder and float in the enchanting aquamarine lagoon. The resort’s Deep Ocean Spa is the first thalassotherapy center in the South Pacific; it uses seawater and the benefits of marine nutrients to heal the skin and offer state-of-the-art massages and treatments. —Alev Aktar